The Zoat are an ancient alien race that was enslaved or specially engineered by the Tyranids and incorporated into the multitudes of subservient bioforms that serve the Hive Mind. They were used as Tyranid "diplomats" since they were more capable of the intelligent thought, logic, linguistics and diplomacy that the other, more animalistic Tyranid species did not engage in.

The use of such alien ambassadors was seen as a good way for the Hive Mind to scout out new species and determine how useful their incorporation into the Tyranid genome would be for the Tyranids' never-ending quest to further their own evolution.

Eventually, the Zoat ceased to be of use to the Hive Mind, and the species was eventually no longer created within the Tyranid fleets by the late 41st Millennium.

The Zoat were capable of assimilating information about other species' languages and psychology with stunning speed, making rapid and accurate leaps in their comprehension of alien creatures. Due to this innate capability for understanding the subtlest nuances of facial and body language, the Zoat were remarkably charismatic and enigmatic creatures who were able to convey more meaning in a look or gesture than a native of the same culture could manage in a sentence.

Although they were a slave race, the Zoat were useful to the Tyranid Hive Fleets and were often used to subvert members of other alien races to bring them under the control of the Hive Mind, leading them against those who tried to resist the Tyranids. In keeping with this role, the Zoat were bio-engineered to be tremendously strong warriors with thick, horny hides. Driven forward by their four powerful legs, a charging Zoat was like an organic battering ram of hide and muscle, their sheer speed and momentum keeping them moving forward even when mortally wounded. In hand-to-hand combat a Zoat could crush most opponents in seconds, proving to other races the awesome power of the Tyranids.

Rebellion by Zoat from Tyranid control was not unknown, but was extremely rare, due to the Tyranids' naturally secreting a special "slave-hormone" which suppressed the Zoats' natural sense of independence and kept them docile servants under the Hive Mind's psychic control. However, renegade Zoats did exist throughout the universe, where they had broken away from the Hive Fleets or had become lost during scouting or exploration missions.

Without the inhibiting influence of the Tyranid slave-hormone, the Zoat were able to develop strong psychic abilities. The range of these independent Zoat communities was incredibly diverse, with small groups isolated from each other on widely scattered planets across the galaxy.

Once the most common of the Tyranids' many specially-engineered slave races, Zoats were unlike most of the Tyranids' assimilated worker-creatures since they maintained their mental independence of the Hive Mind and were therefore often used by the Tyranids as a type of ambassador. Hence it was Zoats that were the first members of the Tyranid species to make contact with the Imperium of Man.

Retrospective accounts speak of a species, assumed to be Zoats, having first made contact with the Imperium as early as the 38th Millennium as their fleet of semi-organic spacecraft attempted to enter Imperial space, claiming they were escaping oppression by an unknown xenos race. It is clear that the Zoats did not declare their true intentions, nor the intentions of their real masters.

Alternatively, it is possible that as the Hive Fleets evolved, the Zoats became a less useful tool, their free thought no longer of much utility. Many of the Zoats, sensing that they were soon to reach the end of their use to the Hive Mind, staged a rebellion. It quickly was crushed, and the rebel Zoats were purged from the Hive Mind's forces.

Those who survived fled ahead of the main Hive Fleets, and made up that first fleet to reach the Imperium, They were soon trapped between their former masters and their new aggressors who saw them as an invading force. Being warlike by nature, they typically reacted in kind, and so ultimately allied themselves against the Imperium regardless.

Eventually, as the Tyranids became a more common sight in the Milky Way Galaxy after the invasion of Hive Fleet Behemoth in the late 41st Millennium, the Zoats were no longer seen outside the ranks of the Tyranids. Their sightings became less and less frequent, and they appear to have been entirely absent from Hive Fleet Leviathan.

If the only Zoats to have entered the galaxy were those of the initial fleet, known as Colossus, then their absence can be explained, as the last known vessel of that fleet was destroyed above Zorastra in 226.M39, after the fleet provoked the Zorastra-Attila War.

The Zoat shared the same six-limbed structure as those of the Tyranid Warrior bioform, probably an evolved bio-construct created using the Tyranid's own genetic material. Physically, the Zoats are centauroid, looking similar to the centaurs of ancient human myth with two muscular arms and no visible mouths, though they were clearly reptilian in nature.

They had thick, scaly hides and tremendous strength which made them deadly in combat. It may be that the Hive Mind found these creatures' usefulness to be less than it had imagined, for the Zoat have been rarely seen by the Imperium or the other intelligent races of the Milky Way Galaxy since the early years of the Tyranid invasion almost 300 Terran years ago. In recent times, the Hive Fleets have sought only to absorb more bio-mass, not conduct diplomacy. 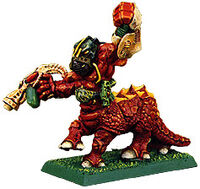 A Zoat with a Flamer and Power Fist 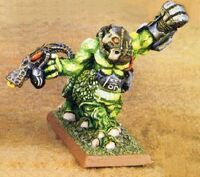 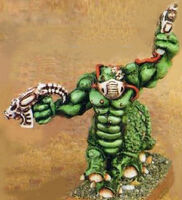 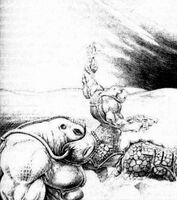 Zoats, as depicted in the early days of Warhammer 40,000: Rogue Trader (1st Edition)

A primitive Zoat on its ancient homeworld
Add a photo to this gallery
Retrieved from "https://warhammer40k.fandom.com/wiki/Zoat?oldid=358962"
Community content is available under CC-BY-SA unless otherwise noted.