"Can't you feel it? It's like a claw crushing my mind in its grasp, squeezing my brain between its talons. I can feel it scratching behind my eyes, tearing at my sanity... Emperor save us!"

Zoanthropes (Tyranicus animus-aborrens) are perhaps the strangest and most bizarre of the Tyranid's myriad breeds. They are powerful psykers, apparently engineered from harvested Aeldari DNA to form living conduits for the focused power of the Tyranid Hive Mind. So extreme is their development that their atrophied bodies and bulbous heads are entirely energised by psychic force.

They can shoot an extremely powerful Warp blast and rival the Aeldari in their psychic prowess. They can move only by psychically levitating themselves, drifting across the battlefield to rain bolts of incandescent psychic power on the enemy or relay the Synapse commands of the Hive Mind to its lesser breeds.

Zoanthropes are without a doubt one of the more effective psychic creatures among the Tyranids. Their primary means of defence is a Warp blast psychic power that can even kill the mighty Space Marines. Zoanthropes are a potent addition to a swarm of smaller Tyranid breeds as they have extended synaptic control and provide hard-hitting ranged psychic attacks.

Despite their power, however, Zoanthropes sometimes seem to be victims of their own massive energy reserves and there have been numerous after action reports of Zoanthropes psychically "burning out" in battle. After hurling numerous psychic bolts or sustaining their shield for an extended period, their craniums have been observed to burst and bleed out, sending them crashing limply to the ground.

Imperial psykers who have witnessed these events liken it to the perils of the Warp which normal psykers can suffer when psychic energy overloads their minds.

In addition to their ability to hurl powerful bolts of Warp energy at their foes, Zoanthropes are also very difficult to destroy, especially considering how weak and feeble their actual bodies are. This resilience stems from their ability to create a powerful bubble of Warp energy around themselves, shielding them from all kind of weapons and even turning aside physical blows in close combat, much like naturally-generated Void Shields.

Like their ability to drift above the ground by extending a bubble of Warp energy around themselves, the psychic shield seems to be constantly regenerated by the Zoanthrope and is always present as long as the creature lives.

It has been noted that the shield seems to strengthen or coalesce around particularly powerful attacks, flashing bright for an instant to turn aside the blow before fading back to a uniform shimmer surrounding the alien psyker.

The Zoanthrope, like many of the other Tyranid bio-forms, possess potent psychic powers, manifested not from drawing power from the Warp but by tapping into the vast gestalt will of the Tyranid Hive Mind itself. Powers that have been displayed by a Zoanthrope include the following: 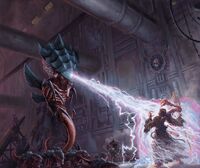 A Tyranid Zoanthrope obliterates a Tech-Priest
Add a photo to this gallery
Retrieved from "https://warhammer40k.fandom.com/wiki/Zoanthrope?oldid=348051"
Community content is available under CC-BY-SA unless otherwise noted.