"These young races are but the dust that has gathered between the cracks in our creation, and now we are here to sweep them away."

Zarathusa the Ineffable is Necron Overlord of the Mephrit Dynasty, and guardian of the Meprit's vast solar harvesting network, known as the Starflame, in the Cryptus System. Also titled the Firesworn, Zarathusa is the last in a long line of keepers of the vast solar mirror that captured the light of the system’s twin suns and provided energy for dozens of Necrontyr systems and worlds. Though Zarathusa saw himself as lord of the stars, and his role as one of the most important in his dynasty, his peers considered him something of a caretaker.

When the War in Heaven threatened to destroy the Necrontyr, Zarathusa and his citizens abandoned the inner worlds of the system they knew as Perdita, destroying the Starflame's vast solar harvest network and leaving only the solar mirror core intact, ready for the time when they would return. Before Zarathusa entered his crypt, he set traps for the unwary, and awaited the time when he might return and reclaim the glory of his people. Machines built to last for thousands of years were forced to endure millions, and one by one Zarathusa’s defences decayed. By the time the Overlord awoke during the coming of the Tyranids Hive Fleet Leviathan, the twin stars of Cryptus had grown old and swollen, their rotten atomic cores pumping out endless streams of hard radiation. More worryingly, the worlds Zarathusa had so carefully scoured clean of life, and laced with traps, were now overrun with humans. When he gazed through the great oculus of Perdita, it was upon the filthy, crowded cities of the Imperium that his mechanical eye fell. To add insult to injury, Mankind had subverted Zarathusa’s prized solar mirror. Like simple-minded savages they crawled across its surface and poked at its superlative inner workings, unaware of its true and glorious purpose. Though Zarathusa himself had not escaped the long sleep unscathed, and his own delusions of grandeur had become magnified, he set about reclaiming his system from savages and aliens alike, now titling himself 'the Ineffable'.

During the course of the Shield of Baal campaign, Zarathusa allied himself with fellow Necron Overlord Anrakyr the Traveller and Dante of the Blood Angels Space Marine Chapter in order to stop the consumption of the Cryptus system by Hive Fleet Leviathan. Zarathusa defended the gas giant Aeros, commanding the Mephrit Dynasty's formidable air fleets to secure air superiority and take control of its fuel hub whilst Anrakyr and Dante fought to secure the Magnovitrium system-inwards in order to channel the sun energy captured by it. Together, the Necrons and Imperial forces managed to pull off their daring plan and detonate Aeros like a planetary bomb, annihilating most of the Tyranids in the system and severely weakening the Cryptus tendril of Hive Fleet Leviathan. Zarathusa and his forces escaped the explosion unscathed, the inertialess drives of the Necron's Tomb Ships easily outrunning the shockwave. In the aftermath of the Exterminatus event, the Blood Angels departed to reinforce the defence of their homeworld Baal against the remaining Tyranids, whilst Zarathusa most likely has begun to reclaim the Cryptus system for the Mephrit Dynasty.

Portrait of Zarathusa the Ineffable 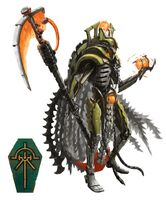 Zarathusa the Ineffable arrayed in his full panoply of war
Add a photo to this gallery
Retrieved from "https://warhammer40k.fandom.com/wiki/Zarathusa?oldid=228723"
Community content is available under CC-BY-SA unless otherwise noted.