Zagstruk is the fanatical and merciless Ork Warboss of a much-feared band of Stormboyz known as the "Vulcha Squad".

His squad gets its name from Zagstruk's personal aircraft, a massive red Fighta-Bommer called Da Vulcha that is an antique by the standards of modern Ork aircraft.

Nevertheless, it still packs a fearsome payload, not least of which are the Vulchas themselves. Boss Zagstruk and his Boyz fly in low attack runs over the front line, riding in the belly of their Vulcha, and at a barked command from Zagstruk, the Vulcha Boyz plummet towards the battle below into the heart of the enemy, iron-plated boots first.

To make sure his feet hit the hardest, Zagstruk is equipped with Da Vulcha's Klaws, a pair of bionik legs that allow him to perform his favourite manoeuvre -- the fly-by decapitation.

Boss Zagstruk is one of the most shockingly violent Orks in the galaxy. It is rumoured that he was born in the centre of a Human settlement and that he quickly throttled his way across the hinterlands to his parent Ork tribe.

He is perpetually angry, and his bulge-eyed glare is enough to subdue even the most raucous Madboy. His approach is heralded by the metallic quickstep clank of his bionik legs, sending every Grot within earshot skulking.

Some claim that Zagstruk once stared down a rampaging bull Squiggoth, though others reckon it more likely that he simply clobbered the bellowing beast until it keeled over senseless.

Zagstruk is a ferocious disciplinarian with absolutely no tolerance for stupidity, incompetence or failure. He is more than happy to put a few rounds through the skull of any Greenskin who displays such traits around him, a fact that tends to keep even the biggest and most truculent Orks in line.

Known simply as "Da Boss" by the awed Stormboyz who flock to his banner, Zagstruk's thermonuclear temper is legend. He never lowers his voice below a bellow, and can fly into a murderous rage with no provocation whatsoever.

The rumour is that Zagstruk has never gone a single solar day without killing something. Da Boss inspires fanatical awe in the Stormboyz who queue up to fight alongside him, and for every underling that he shoots dead there are always two new recruits ready to join the ranks.

Zagstruk is well-known for his characteristic wargear, Da Vulcha's Klawz. After confronting a Space Marine Dreadnought unsuccessfully, both of Zagstruk's legs were ripped off. However the vicious Warboss climbed onto the hull of the offending Dreadnought with only his arms and tore its core systems apart with only his sharpened teeth.

After the battle, he had a pair of piston-driven bionik replacements made, which were actually two modified Power Klaws crafted from the close combat weapons of the Dreadnought he had destroyed. These modified Power Klaws were attached to Zagstruk's leg stumps. He uses these weapons to jump atop enemies with the help of his Rokkit Pack and then rip his latest victim apart. 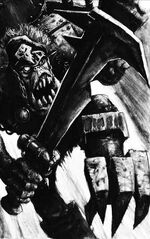 Warboss Zagstruk
Add a photo to this gallery
Retrieved from "https://warhammer40k.fandom.com/wiki/Zagstruk?oldid=380201"
Community content is available under CC-BY-SA unless otherwise noted.