Ynnead (pronounced: INN-ee-ad), sometimes called the Whispering God, is the Aeldari god of the dead and represents the last hope of the dwindling Aeldari species.

At that time the collective souls of the Asuryani will join to form a new entity in the Warp that will battle and subdue Slaanesh, so that all Aeldari spirits may once more be able to merge with it and form a single, balanced entity.

By doing so, if such a thing is possible, they hope that this will allow the Aeldari race to be reborn into a better form. Meanwhile, the craftworlds and the Spirit Stones must be guarded from harm and continue to survive, so that all Asuryani can see and form in their own minds a concept of the Aeldari virtues that will enter along with their souls into the Infinity Circuits.

Ynnead itself (the god of the dead) is a nascent Aeldari deity growing in the collective Infinity Circuits of every craftworld, from the collective souls of the dead Asuryani. Ynnead has yet to manifest itself, as it has not gained enough power to fulfill its purpose: to destroy Slaanesh and free the Aeldari species from the Chaos God's curse.

Ynnead's relationship to Kaela Mensha Khaine is unclear. Ynnead is currently forming within the Immaterium from the collective Asuryani souls found in the Infinity Circuits of the craftworlds. As the Aeldari god Asuryan's psychic might is already bound to each Aeldari soul as the result of that god's actions before his consumption by Slaanesh, Ynnead, when fully formed and awake, will be a potent entity indeed.

He will be so powerful that it has been foreseen that a new dimension will be created, alongside the Immaterium and the material universe, that will be a part of Ynnead. It has also been foreseen by the Aeldari that all of their souls will be forcibly pulled to Ynnead when they die, instead of being drawn into the Warp to be consumed by Slaanesh.

According to Aeldari Mythology and the visions of some Farseers, becoming one with the death god will be like heaven, hell and purgatory all at once. Since the birth of Ynnead offers the one, faint hope to the Aeldari of defeating and overcoming their Great Adversary Slaanesh, all operations regarding his formation and the place of his eventual birth is regarded with utmost care and caution.

Ynnead's coming is the target of much of the Aeldari precognitive powers, as are all theories regarding the acceleration of Ynnead's formation. As Asuryani die and their souls become part of the Infinity Circuits, the nascent god grows in power.

Ynnead remains a dream, the embodiment of a possibility that has yet to be fully realised. Some Asuryani Seers long believed that when the last Aeldari died during the Rhana Dandra (the Final Battle with Chaos), Ynnead would be born from the Warp with the strength of all the Asuryani souls stored in the Infinity Circuits of the craftworlds and the World Spirits of the Exodites.

Ynnead will then have the power to destroy Slaanesh forever in a final battle, thus correcting the mistakes which led to the Fall of the Aeldari and allowing the entire species to be reincarnated into a universe free of the taint of Chaos, freed from the sins of their past and with the chance to build a better future.

Or at least that is what the Asuryani believed would happen for almost ten thousand Terran years. Then, in 999.M41, during the Battle of Port Demesnus on the crystal moon of Coheria, the High Farseer Eldrad Ulthran of Craftworld Ulthwé partially completed a ritual intended to awaken Ynnead using the power of the souls found in the Infinity Circuits of every Craftworld in the galaxy.

While the unexpected intervention of the Imperial Deathwatch interrupted the ritual before it could be completed, the God of the Dead was partially awakened in the Warp, and sought out a champion and prophet to complete his rise in the form of Yvraine, the Daughter of Shades. Yvraine founded a new Aeldari faction dedicated to the Whispering God's resurrection known as the Ynnari.

The Ynnari, with members drawn from the Asuryani, the Harlequins, and the Drukhari of Commorragh, seek the restoration of the ancient Aeldari race and the full awakening of the God of the Dead by collecting the artefacts known as the Croneswords from across the galaxy.

Their combined ritualistic use at a single focused point in realspace will allow Ynnead to fully manifest his power in the Warp, where he will combat Slaanesh, hopefully destroying the Prince of Chaos and freeing the Aeldari from the soul-devouring curse of She Who Thirsts forever.

Only then will the Eldar species, restored to the unity and name of the ancient Aeldari, seek to rebuild a new and better interstellar empire.

The rune used by Asuryani Spiritseers is sometimes associated with Ynnead, the nascent god of the dead, and the mysteries of the Infinity Circuit.

After his partial awakening, Ynnead's Avatar, the Yncarne, displayed a new rune to symbolise the rebirth of the Aeldari, as depicted below. 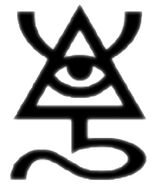 The original rune in the Aeldari Lexicon that represented Ynnead.

The new rune in the Aeldari Lexicon, the Sign of the Phoenix, that represents Ynnead since his partial awakening.
Español
Community content is available under CC-BY-SA unless otherwise noted.
Advertisement