The Xiphon Pattern Interceptor, or simply Xiphon Interceptor, is a void and atmospheric interceptor fighter craft once used by the Space Marine Legions of old. The Xiphon Interceptor was widely used by the Legiones Astartes during the early days of the Great Crusade, before falling out of regular service and seeing a resurgence in service during the Horus Heresy. The Xiphon is rarely used by the Space Marine Chapters of the late 41st Millennium, with limited numbers of the fighter craft found within their armouries. The craft is known to have been used in recent times by the Ultramarines, Space Wolves, Dark Angels, Blood Angels, and the Grey Knights Chapters.

The Xiphon Interceptor can trace its lineage back to ancient times, and while the origins of the Xiphon are lost to history the fighter craft shares many Standard Template Construct (STC) components with a diverse array of Imperial aircraft, including the Amhut Voyager and the Thunderbolt fighter. While there have been multiple variations of the Xiphon Interceptor encountered on lost human colonies or in the fleets of nomadic corsairs, the Xiphon Pattern used by the Legiones Astartes was modified from a pattern found in use by the Rhadamanthys Enclave when it was brought into Imperial Compliance in 806.M30 and was produced at the Celestrix Forge World until its destruction in 914.M30. The Rhadamanthys Enclave made use of cybernetically-augmented human pilots that were capable of withstanding the extreme stress generated by the Xiphon, however it was found that Space Marines could pilot the craft successfully without harm. As a result, the Xiphon was never adopted for use by the wider Armada Imperialis.

Although potent and heavily armed the Xiphon was both more complex and had a limited operational range when compared to the larger Wrath Starfighter as well as being ill-favoured by the Mechanicum. The Xiphon fell out of use by most of the Space Marine Legions by the end of the Great Crusade, with only the Ultramarines and Dark Angels Legions continuing to use them in frontline service. Once the Horus Heresy began, the exigencies of combat and a shortage of replacements for the Imperium's preferred aircraft led many Legions to press their reserves of Xiphons back into battle.

The Xiphon Interceptor is a heavily armed and armoured fighter craft, with two sets of twin-linked Lascannons located on the sides of the aircraft's fuselage. The craft is also armed with a ventral-mounted Xiphon Rotary Missile Launcher, a smaller and more compact design more commonly found on heavy void fighters, and incorporates sophisticated cluster munitions. This firepower when combined with an Astartes pilot and the Interceptor's speed and agility made it an incredibly deadly opponent. The Xiphon is armoured with ceramite plating by default and can be equipped with chaff launchers. Its cockpit can be outfitted with additional protective armour. During the Great Crusade and Horus Heresy the Xiphon Interceptor could also be equipped with ground tracking auguries, sophisticated scanners and advanced Cognis-interpreters that allowed for the detection and analysis of even the most well-concealed ground targets.

The technical specifications of the Xiphon Pattern Interceptor are not currently available in Imperial records.

The Xiphon Pattern Interceptor is very similar aesthetically to the Colonial Viper Starfighter from the the 1978 television show Battlestar Galactica , with some features similar to the X-Wing Starfighter from Star Wars. 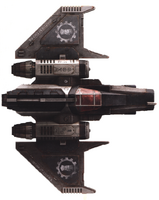 A Xiphon Interceptor of the Ultramarines Chapter, front view

A Xiphon Interceptor of the Ultramarines Chapter, front-side view 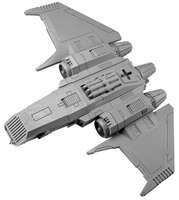 A Xiphon Interceptor, ventral view
Add a photo to this gallery

Retrieved from "https://warhammer40k.fandom.com/wiki/Xiphon_Pattern_Interceptor?oldid=310809"
Community content is available under CC-BY-SA unless otherwise noted.