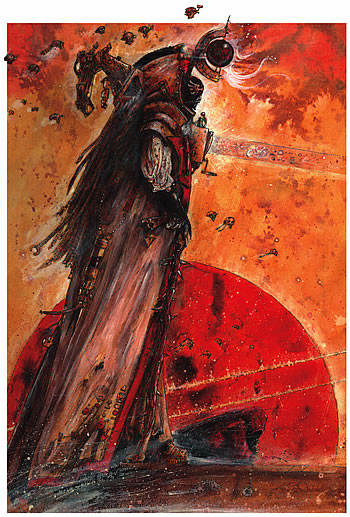 Xiao is an improbably tall and broad-shouldered man with a shaven head and large grey-streaked beard. His blindness - he wears an embroidered band around his head to cover his empty eye sockets - is the only note of physical weakness about him, for even in his robes he is obviously a large and muscular man. Xiao does not permit anyone to send a message through his astropaths unless he deems it necessary. Lord Hax is rarely refused by Xiao, but anyone else must justify the use of the astropaths’ rare talents. Though Xiao is unfailingly polite he is still a very intimidating man and calmly refuses to compromise once he has made his decision. Xiao is one of the most powerful psykers in the Calixis Sector but he never sends astropathic messages personally, even for Hax, always having one of his astropaths do so instead, although it is rumoured that he has an arrangement with someone very powerful for whom he sends messages exclusively.

Just as travel within the Imperium is a complicated and inexact science, so too is the business of exchanging messages between the many and varied planets that make up the Empire of Man. Planetary communications systems such as vox-casters, hardwired lines and the more advanced vox-communicators suffice to pass messages amongst the nations of a world, yet have almost no use beyond the bounds of the planet’s surface. Such devices require many years for their signal to reach even the nearest planet and have no surety of even being detected when they arrive. The perils of travel ensure that human or servitor messengers are just as unreliable and potentially as slow as radio or other energy wave communications.

The Imperium then, is forced to rely upon communication by psychic, or astropathic means. Astropaths communicate with symbols and iconic images, projecting these messages through vast distances of space by means of psychic power. This process is usually exhausting and requires ritual and focus in order to keep the pskyer in the right frame of mind. These can take a wide variety of forms, such as use of the Emperor’s Tarot, vision quests, automatic writing, trances, séances and the like. The Gaolist Astropaths of Hredin for example, spend many years etching their messages onto painstakingly illuminated sheets of iron and then destroy the work of art upon a massive grinding wheel. The pain of annihilating a much-loved labour is said to produce psychic messages of unparalleled clarity.

Retrieved from "https://warhammer40k.fandom.com/wiki/Xiao?oldid=12753"
Community content is available under CC-BY-SA unless otherwise noted.