The XV22 Stealthsuit is an experimental Tau Battlesuit that has been recently developed by the Earth Caste of the Tau Empire. Tau Battlesuit technology is constantly evolving as the Tau learn from experience and utilise their technology to overcome those obstacles that stand in the way of the Greater Good. The XV22 is a product of this innovation, and is the latest evolution of Stealthsuit technology that incorporates advances in cloaking technology, targeting systems and miniaturised Shield Generators. It has yet to be utilised by the Fire Caste on a large scale due to its experimental nature. Whilst the current marks of Tau Battlesuit are easily mass-produced and are known to be reliable, the XV22 is one of several models that are currently still in development. This is mainly due to the technological innovations used in the construction of the Battlesuit that the Earth Caste has not yet been able to produce on a large scale, as the XV22 carries far more technology and combat systems within its frame than even the XV8 Crisis Battlesuit.

Currently, the XV22 has only been issued to trusted Fire Caste Commanders and in turn, some of their high-ranking subordinates. This way, the Battlesuits' performance can be assessed and analysed on the myriad of battlefields that the Tau confront as they seek to expand their empire. The XV22 Stealthsuit itself is of a similar mass to the XV15 and XV25 Stealthsuits, and is designed to fulfil a similar role in covert operations that require a high degree of stealth. Indeed, the XV22 was originally designed to replace the XV15 Stealthsuit as the standard Stealthsuit in the Tau armoury had it not been for the Kappa Mortis Incident, where the Imperial Ultramarines managed to recover captured XV15 Stealthsuit technology, requiring the Tau to rush the XV25 Stealthsuit into large scale production ahead of the XV22 since it was easier to manufacture and the Tau needed a new frontline Stealthsuit that the Imperium had not yet encountered. Whether or not the XV22 becomes approved for general use will be determined after its performance during the battles of the recent Third Sphere Expansion have been analysed. Thus far, it has proven effective, most notably when Commander Shadowsun ambushed a column of Leman Russ Tanks during the fighting on Mu'gulath Bay. While the Stealthsuit’s twin Fusion Blasters ensured that none of the lumbering battle tanks would survive to make a counter-attack, the ability to disappear into the terrain kept the foe from drawing an accurate bead upon her position. The future of the XV22 relies as much upon the performance of its users as theirs does on the success of the XV22 in combat.

The XV22 Stealthsuit incorporates many of the standard features shared by most Tau Battlesuits and is similar in many ways to both the XV15 and XV25 Stealthsuits. The similarities include the incorporated Tau Jetpack, which combines anti-gravitic and jet propulsion technology. The Jetpack allows the Battlesuit to maintain a stable platform from which to fire its weapons, even when on the move, and provides a great deal of mobility for the user. The Jetpack also allows for the Stealthsuit to be deployed from high altitudes by Tau transports such as Orcas and Mantas, where the Jetpack will be used to safely slow the Battlesuit's descent to the surface. In addition to a Jetpack, an XV22 Stealthsuit also incorporates advanced sensors common to all Tau Battlesuits that are built into the helmet. This allows for the user to gather more accurate battlefield data which can assist informed decision-making on where to best deploy singly or with their unit to maximise their tactical effectiveness.

The XV22 Stealthsuit, like the other Tau Stealthsuits, possesses the unique capability to camouflage its wearer using its suite of stealth technologies. The suit's integrated holographic disruption field achieves its effects through the disruptor emitters arrayed all over the Battlesuit. This holographic disruption field can operate in two modes. The default, passive mode utilises a range of material technologies to dampen the suit’s electromagnetic signature so that enemy scanners are far less likely to detect it. This mode is called "passive" because its use cannot be detected by enemy sensors. Rather than attempting to interfere with enemy sensor systems directly, it simply masks the suit itself. In "active" mode, however, the suit's stealth field generator comes online. The XV22's matte finish ripples and blurs, resolving itself into a nigh-perfect representation of the terrain that lies behind it, making the suit and its wearer all but transparent even to visual identification. In this way, the Stealthsuit's form is blended into the background as if its wearer were a Terran chameleon. In addition, when operating in active mode, the Stealthsuit's systems are actively interfering with and jamming enemy sensor devices. In so doing, the jamming itself will give away the fact that the Stealthsuit is present somewhere on the battlefield, but will make the detection of its actual location nearly impossible. Thus, the pilot is afforded a greater degree of protection, whilst also making him or her nearly impossible to target in dense terrain.

The Fire Caste doctrine laid down in the Code of Fire instructs all warriors to fight closely together, with each member of a team doing his utmost to protect not just his comrades, but also nearby teams in his Cadre. With this training, Tau XV22 Stealthsuits can use overlapping fields of fire to provide all nearby teams with mutual support on the battlefield in the case of enemy assaults. 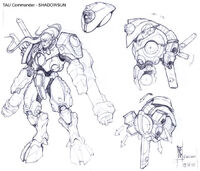 Concept art of Commander Shadowsun in her XV22 Stealthsuit
Add a photo to this gallery
Retrieved from "https://warhammer40k.fandom.com/wiki/XV22_Stealthsuit?oldid=304800"
Community content is available under CC-BY-SA unless otherwise noted.