The XV109 Y'vahra Battlesuit is one of the latest Tau Earth Caste innovations, a new derivative of the XV104 Riptide Battlesuit designed to combat the most dangerous enemies of the Tau Empire. Rushed into deployment after the success of the XV107 R'varna Battlesuit, the XV109 Y'vahra is a Class 10 Battlesuit designed for devastating frontline shock assaults. To facilitate this role, the Y'vahra is equipped with a triple-barrelled Phased Plasma-Flamer capable of vaporising even hardened ceramite, and a massive Ionic Discharge Cannon designed to incapacitate enemy war engines. The complex Vectored Thruster Array incorporated into the Y'vahra's impressive armour allows it to traverse the battlefield in long graceful bounds, slamming into the greatest concentration of the enemy and reaping a heavy toll in lives before jetting away. On the battlefield, a Y'vahra differs from a Riptide in that its role is focused primarily on close-ranged devastation through the precise application of its overwhelming firepower; much like the smaller XV9 Hazard Battlesuit.

The Y'vahra Battlesuit originates with the same Earth Caste engineer who designed the XV107 R'varna Battlesuit, Fio'O Ke'lshan Sho'Aun, infamous for his resistance to the will of the Ethereal council as much as his genius at weapons design. The Y'vahra represents a disturbing paradigm shift in the tactics of the pragmatic Ke'lshan Sept, in whom long years under near constant attack by alien forces has bred a stubborn pragmatism and siege mentality. The new XV109 is clearly a design intended to carry the fighting to the enemies of the Ke'lshan, perhaps marking a new stage of expansion on the Tau Empire's neglected eastern border.

A wonder of Earth Caste engineering, the XV109 stands well over twice as tall as the XV8 Crisis Battlesuit, though its movements are more like those of its smaller cousins than the mechanical stiffness displayed by Imperial combat walkers with their crude servo-motors. While the Y'vahra is huge and bears a number of weapon and support systems, it is still a Tau Battlesuit -- worn and controlled by a lone warrior. As with all Tau Fire Caste warriors, the Fire Caste doctrine laid down in the Code of Fire instructs all warriors to fight closely together, with each member of a team doing his utmost to protect not just his comrades, but also nearby teams in his Cadre. With this training, Tau units can use overlapping fields of fire to provide all teams with mutual support on the battlefield in the case of enemy assaults.

The XV109 Y'vahra Battlesuit's greatest strength, much like the smaller XV9 Hazard Battlesuit, lies in superior short-ranged firepower. With a role focused primarily on long-ranged heavy fire support, the XV109 is easily able to bring its fearsome firepower to bear on infantry and vehicles, eliminating all but the most heavily armoured targets. The XV109 is also capable of operating in almost any tactical environment, including extreme low-light conditions where their advanced sensor arrays can be combined with a Blacksun Filter to allow for the accurate identification and targeting of enemies.

However, despite the XV109 Y'vahra's obvious power, production of the new Battlesuit has proven slow -- the materials for its dense nano-crystalline alloy armour, called Fio'tak in the Tau Lexicon, are difficult to obtain and the sheer volume required ensures that the XV109 is a rare commodity in the Fire Caste. The honour of wearing such a mighty Battlesuit is only given to those who have nobly served their Commanders as Crisis Battlesuit Bodyguards, and these Fire Warriors are always of the honoured veteran rank of Shas'vre. XV109 Y'vahra pilots are chosen to don the greatest of Tau Battlesuits and fight for their Cadre mates; they are exemplar "sword saints" amongst their peers.

XV109 Battlesuits are towering in size, easily many times the size of the Fire Warrior who wears it. XV109s go into battle heavily armed with potent weapon systems and combat support systems that allow them to fight more effectively. However, no matter the Battlesuit configuration or weapons load-out, all XV109 Y'vahra Battlesuits share some common features. These include the advanced sensors built into the primary sensor cluster that serves as the Battlesuit's "head." These sensors, which consist of a number of variable spectrum passive sensors and active scanners, allow the Battlesuit to detect hidden enemy units and their movement; this tactical data can then be transmitted back to Tau command units. All XV109 Y'vahra Battlesuits are also equipped with a Blacksun Filter, which is an advanced optical system that enhances and magnifies a warrior's low-light vision whilst simultaneously filtering bright flares of light that could blind him in battle, and a Multi-Tracker. This is a sophisticated fire control system that is mounted in a sensor node that assists Battlesuit pilots in engaging enemy threats by using multiple armaments at once, making them formidable opponents in a wide variety of battle conditions.

As with all Tau Battlesuits, XV109s are protected by a very thick, dense nano-crystalline alloy armour named Fio'tak in the Tau Lexicon. This advanced alloy has an impact and energy resistant structure that is also sealed against assaults by toxins and corrosives, making it extremely resilient in the face of combat damage. Even the armour's shape helps deflect solid projectiles, while a reflective liquid metal coating is effective at reflecting medium-grade laser fire. Due to the Y'vahra's large size and significant potential as a target, additional nano-layers were also added during its development to upgrade the armour's thickness. When it comes to deflecting and withstanding damage, the XV109's armour is comparable to the Tactical Dreadnought Armour used by the Imperium's Terminator Space Marines. The material is also lightweight, which keeps the Battlesuit's own weight down and reinforces its ground-based manoeuvrability. A Vectored Thruster Array augments the chassis' own Jetpack to further increase the manoeuvrability of the Battlesuit, allowing it to make huge bounds across battlefields in order to reach its target, leap high into the atmosphere so as to redeploy elsewhere, or boost out of close combat with assaulting foes. All XV109 Y'vahra Battlesuits also greatly augment the natural physical strength of their pilots, and grant the warrior within the Battlesuit the ability to crush even heavily armoured vehicles in close combat, if necessary. XV109 Battlesuits feature retractable fingers built into their forearms for use in more delicate -- and often non-combat -- tasks. The Y'vahra is outfitted with a sophisticated artificial intelligence (AI) system, complete with advanced combat systems and numerous comm-links to keep the pilot patched in to its Cadre's Tau Commander.

All XV109 Y'vahra Battlesuits are armed with an Ionic Discharge Cannon and a Phased Plasma-Flamer as standard. The Ionic Discharge Cannon is a very short-ranged, rapid-firing form of heavy Ion Weapon that is most likely a derivative of the Ion Accelerator. Unlike most Ion Weapons, the Ionic Discharge Cannon cannot overcharge its shots; instead they emit an electromagnetic pulse (EMP) upon detonation, which can overload electronic circuitry, causing anything from minor malfunctions in electronics to fires. The effects of this can also blind enemy infantry and sensors. The Phased Plasma-Flamer is a triple-barrelled rotary Flamer Weapon capable of generating temperatures so hot that the emitted flames are in a plasma-like state. As such, the weapon is deadly to even the most heavily armoured infantry. The Phased Plasma-Flamer can be fired in two modes: single canister which only uses a single barrel, and full rotation which uses all three barrels to generate an extended flame burst with the drawback of a small potential for danger and damage to the Battlesuit itself. All Tau Battlesuit weapon systems are fully integrated and supplied by continuous, high-yield power relays and ammunition hoppers. XV109 Y'vahra Battlesuits are also designed with advanced recoil absorption technology, meaning that they can fire their weapons at maximum capacity and with maximum accuracy, even when on the move.

XV109s are equipped with an integrated Ravelin Shield Generator and a Flechette Dispersal Pod as standard. The Ravelin Shield Generator provides similar defensive properties to an XV104's Riptide Shield Generator, except the Ravelin provides better protection against close-ranged firepower and close-combat attacks. The Flechette Dispersal pods, a support system similar to the Flechette Dischargers normally only mounted on Tau skimmer vehicles, fires high-velocity and potentially-lethal flechettes at nearby targets. XV109 Y'vahra Battlesuits can also be equipped with up to two different Tau Battlesuit Support systems, which are listed below.

The experimental Dark Matter Nova Reactor prototype is another essential component of an XV109 Y'vahra's design, and is a slightly modified version of the same technology used by the XV104 Riptide Battlesuit that has been rerouted to different systems. Once the XV109 pilot deems it necessary, the reactor can be activated to supply near limitless amounts of energy. The resulting power can be harnessed to either overcharge the Y'vahra's Ionic Discharge Cannon and dramatically increase its rate of fire, divert power to the Y'vahra's thruster array to perform impressive evasive maneuvers, nova-charge the suit's Ravelin Shield Generator to generate an-all-but-impenetrable barrier, or nova-charge the suit's Vectored Thrust Array to boost out of combat and then redeploy where needed. On an XV109, both the standard fusion reactor and the Nova Reactor are covered with vented chest plates.

Due to the experimental nature of the XV109 Y'vahra Battlesuit, it is often supported by a pair of prototype Shielded Missile Drones, which are a new Tau Drone configuration equipped with a Missile Pod and Shield Generator. These Drones will often provide additional heavy fire support, and use their cohesive energy fields to absorb incoming shots, allowing the Y'vahra to acquire and destroy enemy targets with less fear of enemy fire. Alternatively, an XV109 can be supported by a pair of normal Shield Drones.

Below is a list of the most common available combat support systems that an XV109 Y'vahra Battlesuit can be equipped with:

The Ordo Xenos has not yet determined the technical specifications of this Tau Battlesuit. 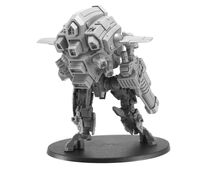 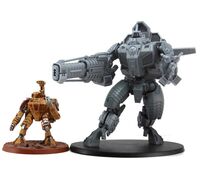 Size comparison of an XV109 Y'vahra Battlesuit (right) and an XV84 Crisis Battlesuit (left)
Add a photo to this gallery
Retrieved from "https://warhammer40k.fandom.com/wiki/XV109_Y%27vahra_Battlesuit?oldid=324597"
Community content is available under CC-BY-SA unless otherwise noted.