"Hiding in the tress are they? Let's see those grox-lovers hide from this!"

The Wyvern Suppression Tank, more often known simply as the Wyvern, is a short-range, self-propelled artillery piece of the Astra Militarum. The Wyvern is a variant of the Hydra Flak Tank, exchanging the Hydra's anti-aircraft Hydra Autocannons for a pair of twin-linked Stormshard Mortars. While it lacks the range and raw power of the Basilisk's Earthshaker Cannon, this ordnance tank was designed for the claustrophobic environment of urban warfare, its weapon system capable of raining down curtains of shrapnel upon enemy infantry without ever exposing itself to danger.

The Wyvern uses a bastardised version of the Hydra's advanced auto-targeting system that constantly runs proximity sweeps of the area for concentrations of enemy infantry. The Machine Spirits of these vehicles are renowned for their malicious nature, as they actively seek the most tightly-packed or vulnerable grouping of enemy infantry and strain to target them, sometimes even overriding the commands of their crews. When the artillery piece does fire, its Stormshard Mortars emit a distinctive roar as they spew clouds of shells high into the air. The sound of these weapons firing becomes the dread of enemy forces facing batteries of Wyverns in dense urban areas, for it is inevitably followed by the sound of those same shells descending with crackling booms as they detonate, and the harrowing scream of the maimed and dying left in their wake.

In a galaxy where many of Mankind's enemies leave the soldiers of the Imperial Guard with a feeling of powerlessness and inadequacy, such a vindictive weapon is extremely popular amongst them. There are few things that can restore a Guardsman's faith like watching arrogant Aeldari or terrifying daemons reduced to piles of bloody, frantic madness by the shelling of a Wyvern artillery battery. The Wyvern is worth its weight in gold for this spectacle alone, not only being devastating to the enemy's forces but improving morale by reducing them to a powerless, terrified mass as they die.

The Wyvern is a very versatile artillery vehicle, as whole batteries of them can rain oblivion upon the foe or they can be attached in small numbers to other formations. A single Wyvern can provide an Imperial infantry platoon with close-range fire support, fending off wave after wave of enemy forces who might otherwise overrun the Guardsmen that it is supporting. When deployed with other formations, a Wyvern can keep enemy infantry from advancing upon vulnerable areas such as flanks and the rear. Even ultra-fast moving targets such as Eldar Jetbikes can find themselves cut to pieces by experienced Wyvern crews. Each successful kill elicits a growl of satisfaction from the Wyvern’s malicious and bloodthirsty Machine Spirit, even as its sensors hunt for its next victim.

The Wyvern is armed with a pair of turret-mounted, twin-linked Stormshard Mortars. Specialising in close-range saturation bombing, the Wyvern fills a very different battlefield role from other Imperial artillery vehicles like the long-range Basilisk or the heavy firepower of the Bombard. Although the Wyvern lacks the necessary firepower to effectively engage enemy armoured vehicles, they do excel at generating an all-consuming storm of shrapnel from which there is no escape. A battery of these tanks can fill a street from end to end with whistling, razor-edged death, relentlessly pounding enemy infantry until nothing remains but bloody mulch and drifting smoke. The shells from the Stormshard Mortars explode above their targets, ensuring their victims have nowhere to hide that their airbursting rounds cannot reach. The shrapnel from the Stormshard Mortar can tear undergrowth to shreds, flakboard and barricades are completely perforated, and craters and trenches are turned into deathtraps. The Wyvern can strike directly at concentrations of enemy infantry in order to clear paths for allied troops, or spread their fire out in an "area denial" bombardment that forces even the most tenacious defenders to abandon their posts or die. The Wyvern is also armed with a single, hull-mounted Heavy Bolter or Heavy Flamer for defence. The vehicle can be outfitted with a Searchlight, Smoke Launchers, an enclosed crew compartment, relic plating, a Dozer Blade, a recovery gear, Extra Armour Plating, fire barrels, a Hunter-Killer Missile Launcher, Camouflage Netting, and an Augur array.

A Wyvern blankets the enemy lines in Stormshard Mortar shells, softening them up before troop transports are sent to the front.

A Wyvern as seen from the side 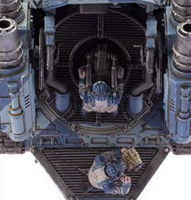 A top-down view of the Wyvern's open crew compartment 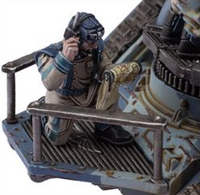 A Wyvern crew member in communication with another officer 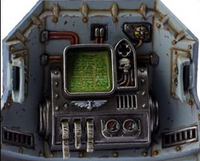 The Wyvern's weapon control console
Add a photo to this gallery
Retrieved from "https://warhammer40k.fandom.com/wiki/Wyvern?oldid=312110"
Community content is available under CC-BY-SA unless otherwise noted.