The Wrath are a Khorne Daemonkin warband that bring butchery to an unimaginable scale. Even in such murderous haunts as Commorragh and the Eye of Terror, these Daemonkin are whispered of with awe. Ferocious beyond the bounds of sanity, The Wrath are little more than beasts in Power Armour.

The Wrath are a warband infamous for utter brutality. Slaughter is not enough for these feral warriors. At battle's end, the warriors of The Wrath fall upon the corpses of the slain, cannibalising friend and foe alike in a hideous victory feast. Skin is peeled, then hacked into ragged cloaks and face masks that are draped across The Wrath's armour. Bones are ripped free and pushed through the warriors' skin as crude totems. Blood is guzzled and organs crushed to a foul paste that is used to anoint weapons and wargear. Finally, all that remains are the fleshless skulls of the fallen, piled in tottering heaps as an offering to Khorne.

The source of this monstrous savagery is the Daemonkin's object of worship. They seek to imitate a Bloodthirster of Insensate Rage named Arbra'Gax and his horrific honour guard, the Charnel Reapers. So complete is The Wrath's devotion that Arbra'Gax's fury has seeped into their souls, setting them aflame with hate. They seek always to destroy their foes utterly, eradicating them down to the last scrap of matter before moving on in search of new prey.

The Renegades of The Wrath have bone helms and Bolters, black Power Armour, and red greaves and shoulder guards. They show their warband's rune on their left shoulder guard. The Khorne Berzerkers of The Wrath have bone helms and weapons, as do the warband's Chaos Terminators. The daemons they summon forth have distinctive blackened limbs and carry weapons that appear to be fashioned from bone.

The badge of The Wrath is a bone Khornate rune set upon a crimson background the colour of wet, flayed muscle. 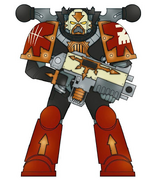 A Heretic Astartes of The Wrath armed with a Bolter 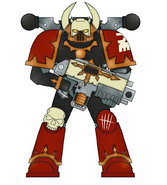 Another Chaos Space Marine of The Wrath armed with a Bolter 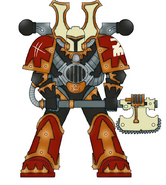 A Khorne Berzerker of The Wrath armed with a Chainaxe, favoured weapon of the Blood God Khorne 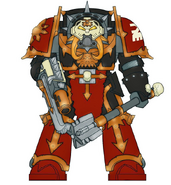 A Bloodletter summoned by The Wrath

Squad markings employed by The Wrath

The daemons summoned forth by The Wrath display the same numbering system used by the majority of Khorne's daemon cohorts, in the form of black claw marks upon their flesh
Add a photo to this gallery
Retrieved from "https://warhammer40k.fandom.com/wiki/Wrath,_The?oldid=306177"
Community content is available under CC-BY-SA unless otherwise noted.