A Witchblade is a psychically-attuned melee weapon that a Craftworld Aeldari walking the Path of the Seer, such as Warlocks and Farseers, often carry to battle. Essentially a potent Force Weapon, these swords resonate with their users, enhancing their physical strength to terrifying levels -- Farseers have been known to slash through the heaviest of Power Armour or cleave battle tanks clean in half with devastating blows from these weapons.

Used to enhance and unleash the latent psychic power of the wielder, Witchblades are effective against all infantry targets; humanoid, xenos, beast or daemon. A Witch Blade contains a helix-shaped, crystalline psychic matrix embedded with runes to channel and focus a Seer's psychic energies.

Singing Spears are weapons that are related to the Witchblades wielded by Farseers and Warlocks that take the form of a long spear, thus providing greater striking range and penetrating power. They are also known for their odd property of returning to the user's hands when called. This quality is particularly useful for Farseers and Warlocks who hurl their spears in battle, and often catches foes flat-footed. However, since a Singing Spear is a two-handed weapon, its use in close combat is reduced. 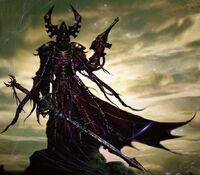 A Farseer of Craftworld Biel-Tan wielding a Witchblade
Add a photo to this gallery
Retrieved from "https://warhammer40k.fandom.com/wiki/Witchblade?oldid=347801"
Community content is available under CC-BY-SA unless otherwise noted.