— Brother-Captain Longinus of the White Consuls

Sabatine (Conquered by the Lords of Silence)

The White Consuls is a Loyalist Second Founding Successor Chapter of the Ultramarines. Unlike other Astartes Chapters, it is unusual in that it maintains two Chapter Masters at the same time.

The White Consuls value wise governance and vision as much as martial skill. In order to advance to a higher rank, the Chapter's battle-brothers must therefore act as local consulate rulers of Imperial worlds.

During the 13th Black Crusade, after the fall of Cadia and the birth of the Great Rift in 999.M41, the White Consuls' Chapter homeworld of Sabatine was overrun by the Lords of Silence and Weeping Veil warbands of Heretic Astartes, but the Chapter itself managed to survive.

The effect this had upon its unusual Chapter hierarchy remains unknown, though the identity of only one of its twin Chapter Masters is currently available. The White Consuls now seek a new world from which to rebuild their greatness.

The White Consuls are listed in the Apocrypha of Davio as having derived from the Ultramarines' gene-seed, and would thus be direct-line descendants of the Primarch Roboute Guilliman.

According to the Mythos Angelica Mortis they are one of the Astartes Praeses, the twenty Chapters of Space Marines created specifically to defend the Imperium of Man from the threat presented by the Eye of Terror, despite the distance of their homeworld from the Segmentum Obscurus.

Unlike all other known Chapters of the Adeptus Astartes, the White Consuls have two Chapter Masters: one who leads the Chapter in its duties guarding the Eye of Terror as its battlemaster, and one who resides on the Chapter's homeworld of Sabatine and governs it. The White Consuls also administer several star systems in their region as protectorates. Among their number was the Boros System, which the Chapter governed from the Star Fort Kronos, the largest void station in the Segmentum Obscurus, until the entire system was corrupted by Chaos and the Kronos destroyed by the Dark Crusade unleashed by the Word Bearers Traitor Legion and the subsequent invasion of Necrons under the Necron Overlord known as the Undying One.

The White Consuls are said to be highly proficient at Drop Pod strikes and are capable of unleashing devastating yet cunning urban assaults.

The White Consuls are pious, zealous and uncompromising Space Marines that have a deep and abiding faith in the Emperor of Mankind. The Chapter seems to worship the Emperor of Mankind as a god and appears to be part of the Imperial Cult, unlike most other Astartes Chapters, who revere the Emperor as an extraordinary human being and the rightful leader of Mankind, but not as a deity. They are known to follow the Codex Astartes almost fanatically, like most of the Successor Chapters of the Ultramarines.

The White Consuls' homeworld was the planet Sabatine in the Segmentum Pacificus far to the galactic south of the Eye of Terror. After the assault of the forces of Chaos following the 13th Black Crusade, Sabatine was overrrun by the forces of Chaos and is now considered a Daemon World under the sole control of the Lords of Silence warband, who have transformed it into a nightmare place very similar to the Death Guard's Plague Planet in the Eye of Terror.

In addition to their homeworld of Sabatine, the White Consuls also maintain sovereignty over several nearby star systems which they hold as protectorates, such as the Boros System and its central world of Boros Prime, site of a massive incursion by the Word Bearers Traitor Legion in the late 41st Millennium (see above).

The White Consuls' Power Armour is intended to be the inverse of their parent Chapter, in this case painted white with a yellow Aquila or Imperialis on the chest guard while all other Chapter symbology is in blue.

The White Consuls' Chapter badge is the profile of a blue, left-facing eagle's head on a white field. This symbol is of the same style as that used by the Black Consuls, with a completely separate colour scheme. 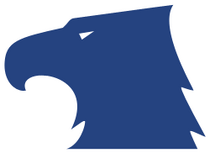 Chapter Badge of the White Consuls