Weirdboyz, also known as Wyrdboyz, are the Orks' psykers, unique in that they act as psychic sponges, absorbing and channeling the natural psychic energies constantly emanated by other Orks. All Orks are innately psychic, though in only a few -- the Weirdboyz -- are these psychic powers fully developed. Weirdboyz have no control over their ability to absorb the gestalt Orkish psychic energy, only being able to channel and discharge it in the form of a specific effect, such as the Psychic Vomit and Gork'll Get 'Em! powers. Weirdboyz are also found in Feral Ork armies, where they are known as Wyrdboyz. Warpheads are those Weirdboyz that -- unlike normal Weirdboyz -- have survived enough battles for their minds to become saturated with the power of the Warp, and actually revel in and enjoy the use of their powers.

The Orks are an innately psychic species and they unconsciously generate a considerable amount of psychic "background noise," an energy field known simply as "Da WAAAGH!" This field of gestalt psychic energy grows more potent and more intense when the Orks themselves are excited, particularly during battle, creating an almost palpable tension that accompanies Ork hordes. Weirdboyz are the psykers of the Ork species, absorbing the energy of Da WAAAGH! and expelling it in violent surges of luminescent green power. Weirdboyz have little control over their abilities, and as the potency of this energy increases with the number and enthusiasm of the Ork Boyz around them, so does the power that a Weirdboy must endeavour to control. Even when they manage to contain this violent and erratic force, bizarre phenomena commonly accompany Weirdboyz, ranging from flashing lights and strange noises to psychokinetic tremors and random fires. Should they fail to dispense, direct or emit this energy in some controlled manner, a Weirdboy may cause even more dramatic phenomena, such as the explosion of nearby Ork heads. This is known as a 'Eadbang if this power cannot be dishcarged safely.

Orks are reckless creatures by nature, and Weirdboyz are "gifted" with the capacity to detonate themselves in many new and interesting ways unavailable to their more mundane brethren. As such, few Weirdboyz would survive long enough to gain any real control over their powers, even if this was something that they desired. However, Orks are not constrained by any perverse wish to "control" their power. "Restraint" is a form of subtlety reserved for "sneaky gitz, like grotz, 'unies, and 'dem prancin' gitz wif' da' big fancy hatz." As such, if a Weirdboy does happen to survive the development of his powers, he is unlikely to gain any wisdom or sense of responsibility to accompany it. Instead, it is much more likely that he will go on to push himself to impressive (and undeniably insane) heights of psychic prowess, becoming more and more puissant and unhinged over time. They learn and invent increasingly bizarre and terrifying powers, mastering techniques that allow them to rend holes in the Warp through which they can travel or pulp enemies through cover with waves of power and managed to avoid a messy death thus far are called "Warpheads." Though Warpheads are obviously rare given their "profession" and proclivities, a single Warphead can make for a terrifying and unpredictable foe. 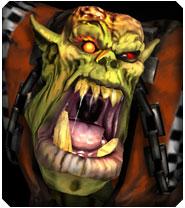 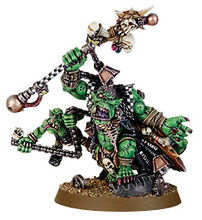 An Ork Weirdboy in combat
Add a photo to this gallery
Retrieved from "https://warhammer40k.fandom.com/wiki/Weirdboy?oldid=137152"
Community content is available under CC-BY-SA unless otherwise noted.