A Weirdboy (pl. Weirdboyz), also known as a Wyrdboy, is one of the Orks' psykers, unique in that he acts as a psychic sponge, absorbing and channeling the natural psychic energies constantly emanated by other Orks. Weirdboyz are the most psychically attuned of all Orks. They are capable of vomiting blasts of Warp energy that can reduce foes to molten goop in seconds. Weirdboyz unconsciously channel the background mental emissions of nearby greenskins. Even a close-run squig-eating contest between two rowdy Boyz will cause waves of energy to pulse through any Weirdboy that strays near. Unless the Weirdboy finds some way to release this pent-up energy his head will explode, detonating the heads of nearby Orks into the bargain. This can prove highly inconvenient. Any Weirdboy lucky enough to reach maturity will have learned how to release his powers in a searing energy blast or destructive wave. Though this makes the Weirdboy feel fantastic, it can result in a messy death for anyone in his vicinity. Some Weirdboyz, known as Warpheads, become addicted to the thrill of spewing WAAAGH! energy, actively seeking out the deadly rush of battle. However, for most Weirdboyz the battlefield is a miserable and dangerous place. They must normally be dragged there by burly minders, pointed unceremoniously at the foe, and forced to spew mighty bolts of ectoplasmic energy in their general direction. This affords the Weirdboy a few moments of blissful relief before the whole process begins again. Weirdboyz are also found in Feral Ork armies, where they are known as Wyrdboyz. Warpheads are those Weirdboyz that -- unlike normal Weirdboyz -- have survived enough battles for their minds to become saturated with the power of the Warp, and actually revel in and enjoy the use of their powers.

Anyone who has seen the living tide of greenskins that is an Ork horde in battle knows, without question, that there is a power to such a force. Any large force of fighting men or xenos has power, but not in the same way that Orks do. While men have strength of arms and ordnance, Orks possess a strength of purpose. Each and every Ork on a battlefield is unified into one singular purpose: war. As men gather in war, there is dissension, personal interest, and honour, which tug at each man individually. When Orks gather into a Waaagh!, the very air thrums with the power of their excitement, their enthusiasm, and their sheer lust for battle. The more Orks, the greater the power they generate. The Orks themselves seem almost unaware of the existence of this phenomenon, all the while swept along by the tide of it. However, a few rare Orks are keenly aware of this energy. The Orks are an innately psychic species and they unconsciously generate a considerable amount of psychic "background noise," an energy field known simply as "Da WAAAGH!" This field of gestalt psychic energy grows more potent and more intense when the Orks themselves are excited, particularly during battle, creating an almost palpable tension that accompanies Ork hordes. 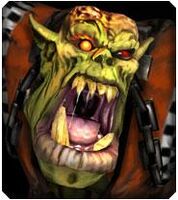 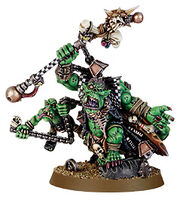