A Warpsmith is a fallen Chaos Space Marine Techmarine who now serves the Ruinous Powers through the creation of daemonic war engines. As the master of the soul forges to be found within the Eye of Terror, it is by their hands that the Daemon Engines such as the Maulerfiend and the Forgefiend come to life, an unholy union of daemon and machine, ready to fight alongside the armies of Chaos.

"On the fifth day the bastions fell, and those accursed techno-monsters entered the northern hab districts. The screams haunt me still."

— Excerpt from the statement of Corporal Vegrandur, prior to his execution for Dereliction of Duty

Warpsmiths are those Chaos Space Marines who serve as the masters of the machine. Exuding an air of authority combined with a hint of insanity, they are the dark echo of the Loyalist Space Marines' Techmarine. Most of these fallen Chaos-worshipping Techmarines can trace their origins back to the Priesthood of Mars, whether through the schisms of the Magi or the rigid doctrine of the Techmarines. However, where the Adeptus Mechanicus regards technology as sacrosanct, the Warpsmiths seek to subjugate and control it. Experts in battlefield repairs and the art of siege craft, their true calling lies in the soul forges of the Warp, especially those in the Eye of Terror. There, they drive the Machine Spirits of captured Imperial vehicles and other weapons mad as their physical forms are rebuilt into bestial and terrifying new shapes. The Warpsmiths preside over their infernal industry as pioneers of mechamorphosis, as they watch Daemon Princes thrust Lesser Daemons into the cogs of giant, mechanoid birth-factories that crank out new Daemon Engines from their cable-lined wombs. When the time for conquest is finally at hand, entire armies of these growling battle engines stomp and soar into the material world under their command, the Warpsmith's bitter ambition writ large and set loose upon the Imperium of Man.

Warpsmiths tend to be obsessive characters who believe that Mankind 's ambition is limited by his mortal nature. Daemons are ultimately insubstantial of form, and machines, though physically indomitable, are all but inert. Because of this, all Warpsmiths are engaged in an eternal quest to combine the strengths of all three of these elements -- mortal, daemon and machine -- whilst eradicating their weaknesses. They would conquer the galaxy and remould it into one giant, tainted flesh-engine if they could. The Warpsmiths themselves seek to embody this unholy fusion of man, machine and daemon; in their search for perfection, they often become more metal than flesh. Some Warpsmiths are little more than a brain and a spinal cord wired into a metallic approximation of a Chaos Space Marine; pincer limbs, Mechadendrites and fusion claws sprout from the Warpsmith's altered form next to Melta crucibles and searing welder blades. 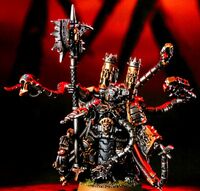 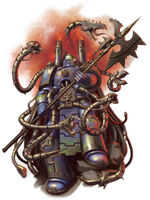 A Chaos Space Marine Warpsmith of an Alpha Legion warband 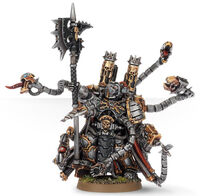 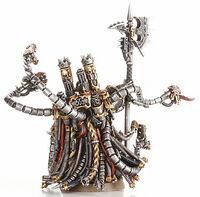 An Iron Warriors Warpsmith, rear view
Add a photo to this gallery
Retrieved from "https://warhammer40k.fandom.com/wiki/Warpsmith?oldid=269436"
Community content is available under CC-BY-SA unless otherwise noted.