A Warp Talon is a Chaos Space Marine Raptor whose long exposure to the Immaterium has corrupted his physical form, enabling him to move through the veil of reality and slice between dimensions. Warp Talons are capable of striking at their enemies as if appearing from nowhere before slinking back into their nightmarish home dimension.

When a pack of Warp Talons emerges from the Warp, it appears to those on the battlefield below as if daemonic warriors have burst out from nothingness into fiery, vengeful life. Like the stuff of nightmares, they plummet downwards in an explosion of Warp fire, tearing into the foe with murderous intent.

Warp Talon packs are comprised of tightly knit groups of horribly altered Chaos Space Marines who possess the ability to slice open the barriers between dimensions. Like their brothers-in-arms, the Raptors, they were once part of the Legiones Astartes Assault companies, though they have followed the path of the predator for so long that they live for nothing more than cutting, slashing and carving apart. This single-minded fixation with the act of severance has been wrought into the very substance of their bodies. In place of its hands and feet, each Warp Talon has a set of crackling blades with supernaturally sharp edges that can temporarily cut through the substance of reality itself.

When the din of war resounds through the air, the Warp Talons are attracted to the ephemeral echoes of anger and pain that reverberate through the Warp. These ripples in the aether are often refracted within the Immaterium, where hunting packs of Warp Talons single out the psychic signature of their prey using senses that a mortal could not comprehend. Once the Warp Talons have closed in upon the emotional reflection of their victim's psyche, they will slice their spirit-sharp talons through the air above their quarry's location, cutting deep wounds in the veil between worlds with their energised claws. In this way, they force their way out from the swirling anarchy of the Warp straight into the material dimension.

Though the lesion they slice in the fabric of realspace seals over as soon as the hunting pack has passed through, the mind-shattering nature of their attack is usually enough to stun their prey into inactivity. When the Warp Talons appear in reality they do so in an explosion of empyric flame, a flare of energy that is all colours and none at the same time, and accompanied by a cacophony of hellish cries that blasts all reason and thoughts of order from the mind. This moment of awestruck hesitation is often fatal, for as the Warp Talons hurtle into the ranks of the foe, their hellishly sharp claws part heads from necks and limbs from torsos.

Like their fellow Chaos Space Marine Raptors, Warp Talons once were part of the Space Marine Legions' Assault Companies and were outfitted with the patterns of rare pre-Horus Heresy Jump Packs. Once the Heresy was underway, they quickly became addicted to the exhilaration of soaring through the skies and falling upon near-defenceless prey, cutting, stabbing and rending them in an orgy of soul-satisfying slaughter. They fell under the "protection" of an hitherto unidentified Chaos God who saw fit to give them the appearance of cruel ceramite birds of prey. The main difference between Raptors and Warp Talons is that where a Raptor has only the appearance of a bird of prey, a Warp Talon's once-human psyche has devolved to the point that he has literally become a daemonic bird of prey.

Physically, Warp Talons appear as corrupted Space Marines whose hand and feet have mutated to become massive, talon-like appendages with preternaturally sharp blade-like digits. Having been corrupted more thoroughly by the Ruinous Powers of Chaos than even their Raptor allies, Warp Talons have been reduced to an animalistic level of existence, having lost the ability to speak, reason, or create. On those rare occasions where they are grounded, they awkwardly hop and crawl around on all fours like flightless birds or bats, yearning to take flight. They communicate between each other with hideous, animal-like screeches, alien even to the other servants of Chaos. Their most outlandish ability, even to their former comrades, is their capacity to rend the veil of reality with their claws, switching between the Materium and Immaterium with ease and at will.

Their very nature means that a pack of Warp Talons is not employed but rather set loose upon enemy forces. Chaos Space Marine commanders cannot meaningfully communicate with these "subordinates", and thus employ Warp Talons by giving them something to hunt. Having fallen even further from their mortal origins than their Raptor allies, the Warp Talons have long since lost the means to speak, reason or create. The violence they wreak is eloquent enough.

A pack of Warp Talons is not employed so much as set loose, for Champions of Chaos know that these skyborne assassins respect only the hunt and the kill at hunt's end. Instead, the Warp Talons are given something important to their prey, such as a hank of hair, a picture, a possession of the enemy's, a loved one's finger bone or a piece of cloth from a favourite item of clothing. It is then that the hunt begins in earnest. Soaring into the skies on plumes of daemonic fire, the Warp Talons depart, already moving as one in their single-minded pursuit. They will not be seen again until their prey is located and battle is joined. Warp Talons are able to identify their prey while in the Immaterium through the emotional reflection of their victims' psyche in the Warp. This allows them to emerge back into realspace within direct proximity of their prey. A Warp Talon's arrival is heralded with a reality-rending flash of light, which often leaves anyone near the point of entry dazzled and awestruck. This moment of hesitation is fatal, for the Warp Talons capitalise upon their victims' disorientation and quickly lop off heads and limbs with great slashes of their talon-like hands and feet.

Warp Talons are utterly baffling to the Ordo Malleus' attempts to categorise them in an attempt to better understand these Heretics and so counter their frightening ability to slaughter the servants of the Emperor at will. They exhibit characteristics of both mortals and daemons at the same time: their ability to enter and exit the Warp at will and without the protection of a Gellar Field speaks of a blasphemous mingling of the substance of the Materium and the Immaterium. Worse yet, which of the Chaos Gods grants them their abilities is also unknown, and the fact that some Warp Talons have exhibited the Mark of Chaos of each particular Chaos God is a frustrating puzzle, as it makes it impossible to determine which of the Dark Gods is at the base of the Warp Talons' creation. Warp Talons dedicated to Khorne are frenzied butchers, springing forth from the Warp as gore-drenched whirlwinds of destruction. Those dedicated to Slaanesh behave as sadistic killers, maximizing the pain and anguish inflicted for their own pleasure. Warp Talons of Nurgle are bloated carrion birds who enjoy taking their time and toying with their prey. Those Warp Talons in service to Tzeentch channel the raw energies of the Warp, making them almost invulnerable as they slash and dismember.

Warp Talons still wear an extremely corrupted form of ancient Power Armour, and the potency of their mutated talons has been likened to that of Lightning Claws. They are still equipped with their now almost unrecognizable Jump Packs, which allow them to soar and fly above the melee in pursuit of their prey. Their most disturbing ability is their capacity to exit from the Warp in close proximity to their victims, appearing unannounced in a dazzling flash of light. 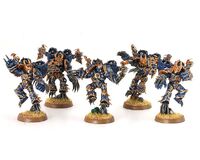 A squad of Warp Talons of the Night Lords 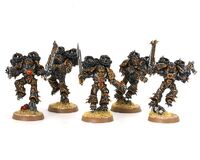 A squad of Warp Talons of the Black Legion
Add a photo to this gallery
Retrieved from "https://warhammer40k.fandom.com/wiki/Warp_Talon?oldid=355254"
Community content is available under CC-BY-SA unless otherwise noted.