Elite Infiltration Infantry
The Warp Spiders are Aeldari Aspect Warriors who specialise in the use of a personal teleportation device built into their Aspect Armour to make a series of rapid jumps through the Immaterium that make them nearly impossible to target and allow them to attack the enemy suddenly and disappear before he can strike back.

Taking their name from the creatures who protect the Infinity Circuits of their Craftworlds, the Warp Spiders epitomise the concept of an aggressive defence.

However, like several of the other Aeldari Warrior Aspects there is no known founder, or Phoenix Lord, of the Warp Spider Aspect Shrines, although the lore of the Kaelor Craftworld speaks of the Lhykosidae, the Wraith Spider, who might be a Warp Spiders Phoenix Lord perhaps even the Aspect's Asurya, the first Phoenix Lord. The truth of the matter may not even be known to the Aeldari themselves, lost in the mists of the ancient past.

The Warp Spiders actually take their name from the tiny but aggressive creatures that are seen amongst the slender Wraithbone trees of the Dome of Crystal Seers that forms the heart of every Aeldari Craftworld. These sparkling entities can move anywhere within the Craftworld, melting their arachnoid bodies into the Infinity Circuit and becoming pure psychic energy before recrystallising to reappear at a new location. They are attracted in vast numbers to invasive psychic entities.

As the Wraithbone core of a Craftworld is supportive of psychic consciousness in a similar way to the Immaterium, it is possible for it to become corrupted by the fragmented consciousnesses of lost human or other non-Aeldari souls. In theory, at least, it would be possible for a daemon of Chaos to find its way into the Wraithbone core of a Craftworld, although such a thing would be immediately apparent.

The tiny Warp Spiders ensure that this does not happen, hunting and destroying alien psychic fragments much as white blood cells in the human body attack and neutralise foreign bacteria.

The Warp Spider Aspect Warriors epitomise the doctrine of aggressive defence. Using a compact Warp Spider Jump Generator housed within the backpack of their Aspect Armour and operating in squads of five to ten warriors which are sometimes lead by an Exarch, these Aspect Warriors can make short Warp-jumps, disappearing into the Immaterium and reappearing into realspace in the blink of an eye.

This enables them to make totally unexpected attacks on their foes, though it does necessitate spending a short time unshielded in the Empyrean. For this reason, the Warp Spiders are considered the bravest of all Aeldari Aspect Warriors -- they risk not only their lives in the name of victory, but also their souls, as Slaanesh hungers for the souls of all Aeldari who dare to enter the realm of "She Who Thirsts" unprotected. Despite this accolade, Warp Spiders are also regarded as strange and terrifying, the furthest removed from the normal Aeldari mindset of all the Warrior Aspects. Warp Spiders also tend to have a bleak outlook on life, and rarely mix with the warriors from the other Aspect Shrines.

The ritual armament of the Warp Spider is the Death Spinner; a highly advanced weapon that extrudes a thick cloud of razor-sharp monofilament wire. The Spinner's magnetic containment field then spools the wire together and hurls it toward the enemy. The wire's own tension causes it to writhe and lash, and where it touches flesh or soft tissue, it slices through the victim's body, causing an agonising and quite messy death. Warp Spiders are also equipped with other standard Aeldari weapons, including Power Blades, Shuriken Weapons and Fusion Guns.

Every Aspect Shrine of the Aeldari is led by an Exarch, an Aeldari who has been called permanently to the Path of the Warrior. An Exarch has travelled so far down that Path that he or she can no longer leave it and so dedicates him or herself fully as a high priest of Khaine in service to the Aspect of the War God that he or she represents. Exarchs wear more elaborate and ornate versions of Aspect Armour which incorporates the spirits of their past wearers, granting an Exarch not only wisdom and knowledge stretching across the millennia but a raw pool of potent psychic energy that can be used in combat.

This permanent acceptance of the Aeldari's "war mask" provides Exarchs with enhanced skill and dedication to their craft and entitles them to access their Shrine's oldest and most advanced wargear. The Exarchs of the Warp Spider Shrines have honed their deadly skills as ambushers to a high degree, passing on this knowledge to the Warp Spider Squads that they personally lead. They are experts in surprise assaults, teleporting onto the battlefield in a storm of crackling lightning, but also know when it is prudent to withdraw from combat and to regroup in order to perform further guerrilla attacks.

Some Exarchs will go into battle with two Death Spinners, wielding them as ably as they would a single weapon, or instead carry a Spinneret Rifle. These weapons eject a single rigid strand of monomolecular wire that punches through armour and recoils in a tight spiral. In addition to this ranged weaponry, some Warp Spider Exarchs will also be equipped with Powerblades, twin Power Weapons fitted to their forearms, enabling the wearer to use both hands freely.

There is no known Phoenix Lord for the Warp Spiders. However, some Aeldari claim that the legendary Aeldari warrior Lhykosidae, known as the "Wraith Spider," a legendary warrior renowned upon Craftworld Kaelor is the Phoenix Lord of the Warp Spiders. Most other Aeldari disagree with this supposition because the Phoenix Lords appeared far earlier in Aeldari history and were responsible for founding their Warrior Aspect after their tutelage by Asurmen. The truth of the matter remains currently unknown to Imperial savants. 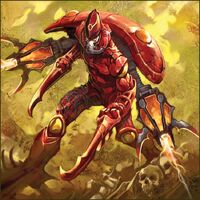 An Eldar Warp Spider Exarch of the Saim-Hann Craftworld

A Warp Spiders Exarch in battle 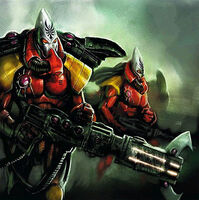 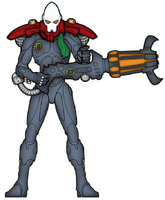 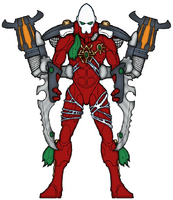 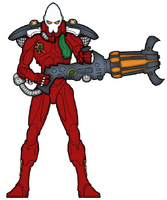 Warp Spiders Aspect Warrior of The Slicing Skein shrine.
Add a photo to this gallery

Retrieved from "https://warhammer40k.fandom.com/wiki/Warp_Spiders?oldid=345604"
Community content is available under CC-BY-SA unless otherwise noted.