The Warmongers is a Loyalist Codex Astartes-compliant Space Marine Chapter of unknown origin and Founding. Little else is recorded about it in Imperial records. 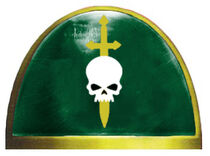 Warmongers Tactical Marine
Add a photo to this gallery
Retrieved from "https://warhammer40k.fandom.com/wiki/Warmongers?oldid=336823"
Community content is available under CC-BY-SA unless otherwise noted.