A Warlord is an exceptionally powerful Ork Warboss who is particularly powerful, wealthy, and successful on the field of battle take on this title. In doing so, the Warlord consolidates power through cunning, ruthlessness and sheer force of will, bringing together disparate Ork tribes, mobs, and warbands under his banner to serve some greater purpose. Usually, this greater purpose is simply to sweep through star systems to fight as many fights as they can and to collect as much treasure as they can carry. Occasionally, however, such an army turns into a fullblown WAAAGH!, numbering in the hundreds of thousands or even millions of Orks, and can pose a grave threat to even the most strongly fortified Sector or Segmentum. Army upon army will flock to the banner of a prominent Warlord until he commands a horde of terrifying size. Ork Warlords often command forces so large that they can wipe out entire armies and conquer whole star systems with the greenskinned fury of a WAAAGH! They can successfully face entire Imperial armies, the hordes of the Forces of Chaos, or any other military force in the galaxy.

An Ork Warlord is always intimidating in his war panoply, as a fierce appearance is essential when ruling with an iron fist. He will claim the lion's share of the spoils of war, even if it means strangling a few Deathskulls Lootas that have got to them first. Warlords often ride at the head of their armies in clanking great Battlewagons covered in personal glyphs and banners.

Whenever a Warlord is killed, the largest Ork Nob in his retinue will take his place, after brutally restoring order among the klan or WAAAGH! and establishing himself as the new Warlord. At times a Warlord's authority may be challenged by his rivals. The outcome of such struggles for power can be resolved in a number of ways. Some Orks prefer low kunnin' (such as assassination or ambush), whilst others will engage in some ritual duel, whether simple brawls, or more elaborate ritual contests such as the famous "Eadbuttin' Kontest" where two Orks keep headbutting one another until one of the contestants passes out from cranial trauma. Among the Orks present in the Jericho Reach, the second option is much preferred, and every Ork settlement in the Reach possesses a fighting pit where the outcome of such challenges can be determined. In fact, many of these pit fights are used as a crude form of Greenskin judicial system, with the outcome of the fight resolving any kind of dispute over loot or position.

Orks judge the worth of a Warlord by the quantity and quality of the enemies he has overcome. The Warlords of ages past adorned their thrones and trophy rakcs with the skulls of their rivals. The modern spacefaring Ork has a far wider range of foes to conquer, and takes great pleasure in twisting off the heads of his hardiest foes and displaying them for all to see. Space Marine helmets usually occupy pride of place on a Warlord's trophy rack. To display the remains of the finest warriors of Humanity upon a trophy rack is a great testament to a Warlord's prowess and right of leadership. Furthermore, Space Marine helmets come in a variety of bright colours; a real plus for the more ostentatious Warlord. To commemorate past victories over vanquished foes, Warlords will often display a boss pole -- a tall pole with a cross arm about a quarter of the way from the top, worn on the Boss' back when he rides into battle. Hung from the boss pole above the Boss' head are a number of banners, pennants, trinkets, gubbins, and skulls of various vanquished enemies.

The following is a list of notable Ork Warbosses and Warlords who have terrorised the galaxy since the Age of the Imperium began in the late 30th Millennium of the Imperial Calendar: 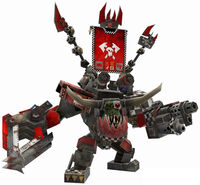 The infamous Ork Warlord Snagrod, the Arch-Arsonist of Charadon
Add a photo to this gallery
Retrieved from "https://warhammer40k.fandom.com/wiki/Warlord?oldid=218581"
Community content is available under CC-BY-SA unless otherwise noted.