The Warboar has been the favoured mount of Feral Ork warriors for as long as any Ork can remember. The Warboar is a fierce and stubborn beast with long, sharp tusks, a thick skull, and the odour of a dung heap -- much like its rider! Warboars are ridden into combat as cavalry by Feral Ork Boarboyz and Wildboyz, and are even used in some of the more advanced Ork tribes and clans, most notably the Snakebites, where Nobz and even a Warboss may ride one into the fray. The Warboar is usually replaced in most Ork tribes with Warbikes, Warbuggies, or Wartrakks when a Feral Ork tribe moves forwards in its technology or is found and integrated into a larger WAAAGH!. Small tribes of Feral Orks living in the remote areas of inhabited planets or alone on uncharted planets rely on the Warboar, with its familiar smell and violent temper, to carry them into battle as quickly as possible. Feral Ork Boarboyz must first capture a wild boar and then beat the creature into submission so that it will allow him to ride upon its back and give it simple commands. The Ork benefits from the speed and ferocity of the creature and the boar for his part in the bargin is treated to a daily supply of gruel, a smelly sty, and the occasianal smack across its snout with a large stick! The Warboar is also used in Feral Ork tribes as forced labour, most notably by Pigdoks, who will strap them to the fronts of Junkas and use them in place of a motorised engine.

The Warboar itself is only armed with its natural defences -- its sharp tusks and razored hooves. The creature is easily capable of running down smaller opponents and ramming larger ones with tremendous force. The Ork that rides upon the Warboar is usually armed with a small ranged weapon, such as a spear or bow, and a close range weapon, usually a Choppa or a Bangstikk, if available. Orks that have developed a higher level of technology may use other small ranged weapons such as a Slugga or a Shoota. The riders may also be armed with anti-infantry fragmentation Stikkbombs or anti-armour Krak Stikkbombs. When a Nob or a Warboss rides a Warboar into battle they can choose from nearly all of the weapons present within their tribe or clan's armoury.

There exist two known variants of the Warboar that are used by Feral Ork tribes and by the Snakebite clan: 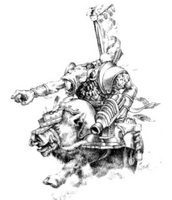 An Imperial illistration of an Ork Nob riding upon a Cyboar 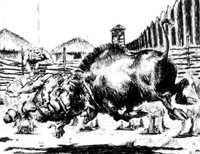 An Imperial sketch of an Ork Super-Cyboar

An Imperial illistration of an Ork Warboss upon his Super-Cyboar mount
Add a photo to this gallery
Retrieved from "https://warhammer40k.fandom.com/wiki/Warboar?oldid=218561"
Community content is available under CC-BY-SA unless otherwise noted.