A Warbiker (pl. Warbikerz) also known as a Bikerboy (pl. Bikerboyz), are those Orks addicted to high speed. Forming Mobs, these addicts race into battle at suicidal speeds, exhausts belching greasy clouds of smoke. As they hurtle toward the enemy ranks, the Warbikerz fill the air with a murderous storm of shots from their blazing Dakkaguns. Surrounded by billowing clouds of smoke and dust, the Warbikerz are protected from the worst of the enemy's return fire -- by the time the Bikerboyz thunder out of this swirling cloud, they are all but on top of the foe.

Wide-eyed and panting behind goggles and dust-masks, most Warbikerz' need for speed is such that they can barely stand to stay still for five solar minutes. The more canny Warbosses use this to their advantage, sending their Warbikerz to trigger traps and ambushes prematurely, to run down enemy supply convoys, or to soften up the foes' defences before the rest of the tribe gives them a good stomping.

Warbikerz are speed-addicted Orks known as Speed Freeks who are primarily members of the Kult of Speed, an Ork kult whose members rarely if ever leave the saddle. These grinning loons roar into battle upon massive single-seater attack bikes called Warbikes, with twin-linked mounted Dakkagunz -- an exceptionally heavy armament for such a small vehicle -- which often leads to their Warbikes bucking and spinning wildly out of control when the guns are fired. The Orks find that this adds to the appeal of the bike, making it more exciting to ride. Nothing can compare to the raw excitement of hurtling towards the enemy on a Warbike with all guns blazing. This is why so many Speed Freeks and Evil Sunz Orks are Warbikers. Warbikerz are so reckless that they will even let go of the handlebars when careening into the enemy the better to lay about themselves with Sluggas, Choppas and improvised weapons.

Warbikerz typically have a specific set to their features, especially after a really good battle. Their lips are drawn back in an ecstatic toothy grin, and their bloodshot and unfocused eyes are opened frighteningly wide. They often seem to shake for a good hour or two after leaving the saddle, for suspension is unheard of in Ork vehicles. Even in times of relative peace Warbikerz have a tendency to let loose the occasional whoop or cackle as they relive their glorious charge into the ranks of the foe.

Warbikerz function as outriders and shock troops for the main horde. The pall of exhaust and oily smoke thrown up by their vehicle helps conceal their advance, giving them a measure of protection from enemy guns. Some Warbiker tribes have even been known to use controlled skids to communicate messages back to their fellows by sending up clouds of dust. The Flaming Skull tribe go one step further, and are allegedly able to synchronise the skids of their bikes so precisely that when enemy aircraft pass overhead they are greeted by trails of oily smoke and dust that spell out "Zog Off." 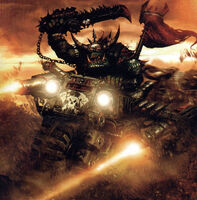 An Ork Warbiker charging into battle

Ork Warbikerz careen into the ranks of their foes 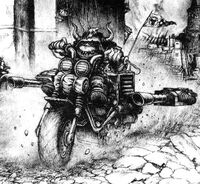 Another ancient depiction of Ork Warbikerz in battle 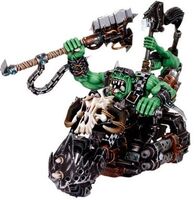 A typical example of an Ork Warbiker 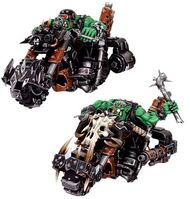 A pair of Ork Warbikerz

Ork Warbikerz charge into battle astride their massive Warbikes
Add a photo to this gallery
Retrieved from "https://warhammer40k.fandom.com/wiki/Warbiker?oldid=337566"
Community content is available under CC-BY-SA unless otherwise noted.