War Walker pilots often become emotionally attached to their mounts, and a union of the pilot's mind with their machine ensues. This union is aided by the presence of an Aeldari Spirit Stone, containing the spirit of a deceased Aeldari that has been melded with the walker.

The conjoined minds of the pilot and the individual personality within the Spirit Stone provides a much sharper focus and a deadlier concentration in combat that enhances the mission effectiveness of the walker.

Standing three metres tall, the War Walker is the smallest and lightest of the Aeldari's many different types of combat walkers. It is controlled by a single pilot who merges with its Wraithbone core. This Aeldari enters a meditative state to become one with his machine. Piloting a War Walker is often an Aeldari warrior's first step to eventually becoming the steersman of an Eldar Titan.

The pilot is assisted by a variety of advanced support and failsafe systems, including the use of a Spirit Stone containing the soul of an experienced Aeldari warrior that has been melded with the walker in certain situations, while an advanced gyroscopic-stabilisation system and the War Walker's articulated legs allow the walker to traverse even the roughest of terrain.

The War Walker mounts a pair of Aeldari heavy weapons, which can include a Brightlance, Scatter Laser, a Shuriken Cannon, a Starcannon or a Missile Launcher, giving the walker the versatility it requires to fulfill multiple tactical roles. In order to preserve its mobility and maneuverability, the War Walker lacks much in the way of armour, though the pilot is protected by a shimmering Holo-field. This Holo-field distorts the War Walker's outline and location, providing the pilot with an equivalent level of protection as to be found in a fully up-armoured vehicle of the same size and configuration.

Though lacking much in the way of armour, a War Walker is protected by a Holo-field like many other Aeldari vehicles and spacecraft, which blurs the image of the War Walker, making it difficult to see and target by enemy vehicles and infantry.

Because their vehicle possesses so few defenses, War Walker pilots rely on speed, overwhelming firepower, and their Holo-fields to allow them to destroy or rout enemies before they can be eliminated themselves.

War Walkers are most often deployed in squadrons comprising one to three walkers. War Walkers are first and foremost used as reconnaissance vehicles, typically operating ahead of a larger Aeldari military force to determine the location of the enemy's lines.

Once that mission has been accomplished War Walkers are often used to provide suppressive fire for squads of Aeldari Aspect Warriors and Guardians; a full squadron of War Walkers can often wipe out an entire enemy infantry platoon in a single volley. However, when operating in this fire support role, War Walkers often expose themselves to enemy fire, which can lead to heavy losses amongst these poorly defended vehicles.

Aeldari Corsairs also commonly employ War Walkers in their raids against the worlds of the "lesser races," valuing the walker's mobility and heavy firepower, but Corsairs also employ a variant of the walker known as the Wasp Assault Walker that is more suited to being dropped from orbit to a planetary surface as part of an airborne drop infantry force.

The War Walker rune reflects the skill and speed of these vehicles as they stalk their prey, while their Guardian pilots proudly embody the spirit of Kurnous, the horned Aeldari god of the hunt. 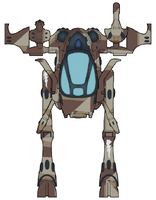 A Craftworld Alaitoc War Walker painted in desert camouflage (Front View)
Add a photo to this gallery
Retrieved from "https://warhammer40k.fandom.com/wiki/War_Walker?oldid=348255"
Community content is available under CC-BY-SA unless otherwise noted.