The Vultarax, also known as the Vultarax Pattern Stratos Battle-Automata, was the principal model of flying Battle-Automata used by the armed forces of the Mechanicum throughout the Great Crusade and the Horus Heresy. The Vultarax is a robust, multi-role robot which is both heavily armed and remarkably swift. Its sophisticated sensory gear allows it to operate effortlessly in hostile environments and dense terrain where more conventional units would struggle considerably. Tactically versatile, the Vultarax proved itself to be the keystone of both the Taghmata Omnissiah's and Explorator Expeditions' air-support.

Many Imperial savants of the late 41st Millennium have remarked upon the many similarities the Vultarax shares with the Daemon Engines later known as Blight Drones that are preferred airborne combat support units for the Death Guard Traitor Legion. Believed to be twisted perversions of the ancient Vultarax Stratos-Automata, these fly-like mechanical horrors ride the high air currents over the battlefield on droning turbines, before dropping down to slaughter the enemy with cannon fire and feed upon their seeping corpse-fluids.

Unlike most other Battle-Automata -- and indeed some other classes of Stratos Battle-Automata -- of the Mechanicum Taghmata, which were designed with primarily humanoid or animal forms, the design of the Vultarax owed little to nature, even in the abstract, save perhaps to certain predatory creatures of the deep ocean. Instead, it was based on pre-Imperial STC templates for autonomous aerial machines and constructed around a powerful variant of the cybernetica cortex. The Vultarax was conceived during the Age of Strife on the Forge World of Anetarbraxus and later given up in tribute to Holy Mars. From the Red Planet, it quickly spread to other Forge Worlds in the solar decades after Anetarbraxus' reunification with the Imperium. By the time of the Horus Heresy, it was one of the rare testimonies to the Forge World's existence, Anetarbraxus having been reduced to molten slag during the Great Mandragoran Incursion.

For a flying machine or a Battle-Automata of its size, the Vultarax is powerfully armed which as furthered its use as a rapid response unit and hunter-killer role in open battle. The Vultarax also frequently serves in scouting duties.

The technical specificatrions of the Vultarax have not been made publicly available by the Adeptus Mechanicus. 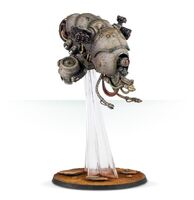 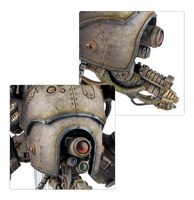 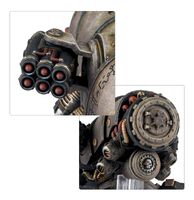 A Vultarax Battle-Automata displaying its various weapons systems, including one of its Setheno Pattern Havoc Missile Launchers
Add a photo to this gallery
Retrieved from "https://warhammer40k.fandom.com/wiki/Vultarax?oldid=324567"
Community content is available under CC-BY-SA unless otherwise noted.