Voss (not to be confused with the similarly named planet Voss Prime) is an Imperial Forge World of the Adeptus Mechanicus that is located in the Segmentum Solar of the Milky Way Galaxy. It was discovered by the Imperium early in the Great Crusade, and played a vital role in the mass-production of highly advanced las weaponry for the military forces of the burgeoning Imperium. Regrettably, this vital Forge World, along with several others, including Mars itself, declared for the Traitors' cause during the Horus Heresy. Eventually, Voss was cleansed of the Dark Mechanicum's presence and it was brought back into the light of the Emperor's grace. Since that time, Voss has gone on to prove its worth as an industrious and vitally important Forge World of the Imperium.

The early history of Voss has been lost across the millennia, but in the early years of the Great Crusade, one of the first tasks of Imperial expansion from Terra was to link up with a number of key domains within the Segmentum Solar identified as vital to the Great Crusade's success. Crucial among these were several Forge Worlds with whom the Mechanicum of Mars had maintained some relationship throughout the tribulations of the Age of Strife. In many cases, these inclusions went without difficulty, such as with Voss, whose masters had bent the knee to Mars without qualm. Since that bygone era, Voss has continued to contribute its industrial efforts to the might of the Imperial war machine.

Throughout the Great Crusade, Voss continued to play in important role by mass-producing some of the most advanced and adaptable las weapon designs for the elite units of the Imperial Army's Solar Auxilia. Though this elite military branch usually sourced their arms directly from Terra and Mars, they latterly also did so from Voss, Telastoria and Triplex Phall when possible.

With the outbreak of hostilities between Traitor and Loyalist forces during the galaxy-wide civil war known as the Horus Heresy, the Mechanicum was also split in half by internecine conflict. Within the ranks of the Dark Mechanicum could be found powerful elements of the Martian Priesthood, the Ordo Reductor and the Legio Cybernetica, along with many of the feared Myrmidon Destructor Cults and a number of sub-cults which had operated for long Terran years on the edge of tech-heresy, all drawn together by the traitorous Fabricator-General Kelbor-Hal. With them had come the support of more than half of the legions of the Legio Titanicus as well as dozens of allied Knight Houses, and now Mars itself was lost to the Loyalists, while the output and military power of Forge Worlds such as Voss, Sarum, Cyclothrathe and Stygies VIII had been handed over to the Traitors.

With the defeat of Horus and the subsequent Great Scouring, the Dark Mechanicum forces were cleansed from Voss, and this vital Forge World was once against brought back into the Emperor's fold, where it has continued to play an important role in the mass-production of arms and equipment for the Imperium's military forces. 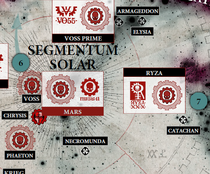 Adeptus Mechanicus stellar cartographic map depicting the Forge Worlds of the Segmentum Solar, including the Forge World of Voss
Add a photo to this gallery
Retrieved from "https://warhammer40k.fandom.com/wiki/Voss?oldid=309513"
Community content is available under CC-BY-SA unless otherwise noted.