In addition to the Redeemer's usual centreline weapons turrets, the Vortimer Pattern Redeemer utilises a rare and powerful Psycannon in the arsenal of the Grey Knights. These rare and archaic weapons were created specifically by the Imperium to combat daemons and the other entities of the Immaterium.

The Psycannon's bolt is devastating to the psyches and physical bodies of psychic creatures, such as psykers, daemons, and Daemonhosts, those individuals who have been possessed by the daemonic entities of the Warp. The Psycannon is a more powerful version of the Bolter, equivalent to a Heavy Bolter, utilizing high-calibre, psychically-charged, ritually-inscribed silver-tipped Bolts.

The negative psychic charge and anti-daemonic ritual inscription on every Psycannon Bolt allows it to pass through any defensive shielding, whether it is created by psychic energies or generated by gravitic technologies like Void Shields or Conversion Fields.

The Land Raider Redeemer is the evolution of the Land Raider Crusader pattern that was brought into service with the Adeptus Astartes following the Purging of Grissen at the hands of the Fire Lords Chapter, as a means of scouring dense city ruins of ensconced enemy forces.

The Grey Knights were quick to adopt the pattern, the Master of the Forge ordering a certain number to be constructed on the Martian moon of Deimos that now orbits Titan and completed by the Chapter's Techmarines, who applied their own rites of techno-purification to turn it into a tank capable of halting a daemonic incursion taking place within the confines of an overrun city.

A small number of Redeemers in the service of the Grey Knights are further configured according to the Chapter's unique role and exacting specifications. As formidable as the armaments of a regular Grey Knights Land Raider Redeemer undoubtedly are, the Vortimer Pattern Land Raider Redeemer bears one particular weapon that makes it dreaded above all others by those who would make common cause with the legions of the beyond.

The Redeemer's usual centreline weapons turret mounts one of the few remaining Psycannons in the arsenal of the Grey Knights, weapons so rare each is an irreplaceable relic and its use must be sanctioned directly by the Grey Knights' Chapter Council.

So armed and equipped, a Grey Knights Redeemer can carry its lethal cargo of holy warriors into the heart of the most terrible daemonic incursion to purge the unclean with purifying flame. Truly, there is no sanctuary for the daemon when confronted by a Grey Knights Land Raider Redeemer and should an incursion manifest within the heart of an Imperial city, the champions of Mankind have a proven means of averting it.

Such incursions are far from uncommon, for rogue psykers are want to be spawned in the massively overpopulated guts of hive cities and mass hab-sinks, triggering the slaughter of millions and the doom of entire cities when they inevitably fall victim to the baleful perils of the Warp, the daemonic legions of that dire realm ripping a portal through what remains of their shredded souls.

The Redeemer variant of the Crusader keeps all of its predecessor's upgrades, except the pintle-mounted Multi-Melta, and replaces the hull-mounted, twin-linked Assault Cannons with twin-linked Psycannons and the sponson Hurricane Bolters with massive flame-throwers known as Flamestorm Incinerators.

The Flamestorm Incinerator can send a billowing cloud of burning Promethium into enemy fortifications and buildings, and is capable of cleansing even the most well-defended structures.

The Redeemer is capable of transporting up to twelve fully-armoured Space Marines, or six Terminators into battle, and can use its Frag Assault Launchers to clear enemy infantry away from the front ramp so its cargo of armoured warriors can charge into enemy-held territory or structures.

Like all Land Raiders, the Redeemer has a very potent Machine Spirit (artificial intelligence), which is capable of taking control of the vehicle and its weapons if the crew is killed or otherwise unable to operate the vehicle. The Vortimer Pattern Land Raider Redeemer is also equipped with Frag Assault Launchers that fire Psyk-Out Grenades in addition to the usual Frag Grenades.

Like its standard counterpart, the Vortimer Pattern Land Raider Redeemer can also make use of a number of additional enhancements, including: a Searchlight, a Hunter-Killer Missile Launcher, a Dozer-Blade, pintle-mounted Storm Bolter, pintle-mounted Multi-Melta, Extra Armour Plating, Psybolt Ammunition, a Warp Stabilisation Field and Truesilver Armour.

A Grey Knight Vortimer Pattern Land Raider Redeemer may take one of the following pintle-mounted weapons:

Grey Knight Vortimer Pattern Land Raider Redeemers may also have a variety of vehicle equipment such as: 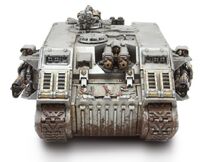