The Vortex Warhead, also called a Vortex Missile, is an extremely rare and advanced type of specialised Warp-based ordnance used only in the direst of circumstances by the Astra Militarum, the Titan Legions or the Imperial Navy. The weapon is a recovered archeotech product of the Age of Technology and looks like a large ballistic missile mounted either on a Titan weapon hardpoint, or a Deathstrike Missile Launcher.

The payload of the weapon is no mere explosive, but a complicated mechanism which shows many similarities with the Warp-Drives that allow the Imperium of Man's starships to travel between the stars.

Once detonated, the warhead's mechanism opens an uncontrolled "hole" into the Immaterium from realspace, which utterly annihilates anything caught in its area of effect.

Vortex weapons are extremely difficult to construct, and are also fickle and unpredictable. Indeed, once opened by a Warp weapon's detonation, the Warp vortex can drift randomly around, sustaining itself on any present Warp energies, and annihilating friend and foe alike.

Vortex Warheads are only deployed and used with special authorisation from the Departmento Munitorum, and only when Imperial commanders are past any consideration of collateral damage. The firing of a Vortex Missile by Astra Militarum forces is normally the responsibility of the engaged force's Lord Commissar.

Vortex missile warheads were first used in warfare by the early Warlord-class Titans and Imperator-class Titans. During the dark days of the Horus Heresy, they utilised these missiles to devastating effect against Traitor Titan Legions; however, such violent and epic combats saw many of the great Titans that were so armed, such as Vulkan's Honour, destroyed in towering balls of Warp energy. Out of respect, Imperial scholars have been selective as to what remains widely known about these incidents.

Due to the dangers of assembly and the uncontrollable forces involved, it was once the sole responsibility of the Adeptus Mechanicus to manufacture vortex missiles. By the end of the 31st Millennium, they were officially only to be constructed on Mars, Graia and Gryphonne IV.

There, the warheads would then be exported to other Forge Worlds where they could be combined with their missile housings, before being distributed to the necessary regiment or fortification.

Because of a clerical glitch of the Departmento Munitorum, other Forge Worlds soon began constructing whole vortex missiles. By M35, almost all Forge Worlds in the Imperium had at least some expertise in the weapon's assembly.

Eventually, fulfilling a need for greater firepower within the Astra Militarum arsenal, the Departmento Munitorum ordered that vortex missiles be deployed mounted on Deathstrike Missile Launchers. Such weapons are not often deployed if it can be avoided, and it remains a capital offence to stray from mission orders whilst using one.

Because of their impressive reach, it was only a matter of time before vortex missiles began to be housed in the Aquila Strongpoints found on the most heavily fortified worlds, with up to seven at a time being primed for use.

The first use of a multiple vortex missile launch that is described in Imperial records was on Magnax V. Situated on a major trade route, the planet was victim to an attempted raid led by the Night Lords, but the thousand-strong warband was decimated by three vortex missiles. Ever since then, such structures began appearing on isolated or strategically important planets, bringing salvation in dire times.

By accident or misfortune, vortex missiles have been known to occasionally detonate within a defensive emplacement. In 899.M40, such a disaster befell the Mordian 189th Armoured Regiment on the Agri-World of Thantus X, turning a successful defence against an Ork WAAAGH! into abject failure. Incorrect benedictions by a novice tech-priest resulted in the Warp energy exploding without the missile being launched.

The ensuing destruction of Imperial fortifications led to the loss not only of an Imperial planet, but an entire star system's food supply, reinforcing both the terrifying reputation of this weapon as well as the caution and reservation with which they are deployed.

It proved an extremely dangerous task and nearly all of these ships were lost to savage attacks from within the Warp itself. Thanks to the discovery of arcane texts on the Hive World of Eustis Majorus, the Adeptus Mechanicus managed to recreate similar results by using numerous powerful psykers to manifest and contain a raw spark of the Immaterium.

The latter stages of construction transfer the energy created into a capsule that carefully insulates it from a single psy-rod; upon impact, the capsule is crushed, the Warp energy meets the rod, and a trans-dimensional vortex field is unleashed. 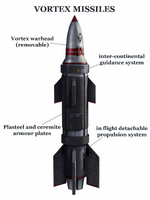 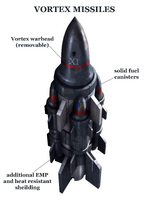