The Vorax-class Battle-Automata is a hunter-killer unit created from the ancient and revered Crusader template pattern said to date back to the Dark Age of Technology and which may be found on every major Forge World in the Imperium.

The Vorax-class Battle-Automata was created on pre-Imperial Mars to fulfil the roles both of search and destroy weapon and exterminator of rogue machines and mutant vermin. Their Cybernetica cortex engrams are known to be particularly predatory and vicious examples of their kind. Such are the bestial instincts that sleep within the Vorax's blast-steel and ceramite body that numerous cut-outs and override cantos are hard-wired into their control programming to prevent these tireless hunting machines from devolving into beings similar to the renegades they prey upon in the shadows of the great forge-fanes on Mars. Armed with a pair of Rotor Cannons and a Lightning Gun, the Vorax are prepared to meet most threats. At close quarters their battle-automata power blades make short work of even heavily armoured infantry units.

At times they were also despatched by their masters to conduct a cull of surplus population during a time of famine or plague, their hunts only ending and their guns falling silent abruptly when some unknown tally of slaughter has been reached. It is little wonder then that the Vorax are held in superstitious dread by the human indentured labourers of the Mechanicum's far-flung domains and by the Neophyte Adepts of the Omnissiah's priesthood alike. 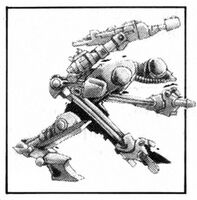 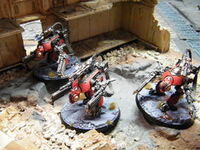 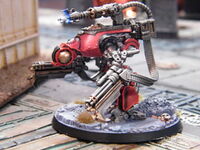 A Vorax-class Battle-Automata armed with a deadly array of weapons, consisting of a Lightning Gun and two Rotor Cannons
Add a photo to this gallery
Retrieved from "https://warhammer40k.fandom.com/wiki/Vorax-class_Battle-Automata?oldid=331184"
Community content is available under CC-BY-SA unless otherwise noted.