Volkite Weapons is an arcane term used by the Adeptus Mechanicus to refer to a class of powerful thermal ray weapons whose technology is pre-Imperial in origin and dates back to the Age of Technology or the Age of Strife. These weapons possessed considerable killing power, surpassing most other armaments of their size.

Blasts from Volkite Weapons were even known to be able to penetrate the thick ceramite plates of Space Marine power armour with one concentrated shot. Volkite Weapons produced a deflagrating attack, in which subsonic combustion caused by a beam of thermal energy propagated through a target material by thermodynamic heat transfer so that hot burning material heated the next layer of cold material and ignited it. A Volkite Weapon's heat ray had a devastating effect on organic matter, explosively burning flesh into ash and jetting fire.

Unfortunately, Volkite Weapons of the various types were difficult to manufacture, even for the most able of the ancient Mechanicum's forges, and the demands of the expanding Great Crusade in the late 30th Millennium swiftly overwhelmed the supply of these relic-weapons.

Once relatively common within the fledgling Space Marine Legions and the military forces of the pre-Heresy Mechanicum, Volkite Weapons had fallen largely from favour by the time the Horus Heresy began in the early 31st Millennium and had been superseded by the far more flexible and utilitarian Terran bolter.

Those few examples of a Volkite Weapon that remained in service were the purview of only a few specialised units at the outbreak of the conflict that tore the Imperium apart in a galaxy-spanning civil war. Volkite Weapons in the present time are exceedingly rare, and are scarcely ever seen amongst the Chapters of the Adeptus Astartes in the 41st Millennium.

These rare thermal weapons were also once the standard armament of a significant number of Solar Auxilia infantry regiments of the Imperial Army, becoming increasingly scarce as the Great Crusade wore on, and by the Horus Heresy became the preserve of only the most elite of their Veletaris units. To carry such a weapon became a thing of great distinction in the ranks of the Solar Auxilia, the weapons themselves passing from soldier to soldier as time went on as an indicator of elite status.

The pistol variant of a Volkite Weapon wielded single-handed, the Volkite Serpenta was sometimes carried by high-ranking soldiers of the Imperial Army and the Tech-priests of the Mechanicum during the Great Crusade era.

The Volkite Blaster is one of the few types of Volkite Weapon still used by the military forces of the Imperium in the 41st Millennium. Volkite Blasters are known to be wielded by Adeptus Mechanicus magi dominus.

The Volkite Charger was the assault weapon variant of a Volkite Weapon carried by Space Marine infantry and the military forces of the Mechanicum. Whilst not benefiting from the range or power of its larger cousins, the Charger retained the Volkite thermal ray's deflagrating effects and allowed its wielder a greater degree of movement.

The Volkite Caliver was a Volkite heavy weapon variant carried by Space Marine and Mechanicum infantry forces. A Volkite rifle with a devastating effect on flesh and bone, the Volkite Caliver was often employed by mobile Legion Tactical Support Squads, utilising firepower superior to that of the more common bolter that would eventually replace it as the standard infantry weapon of the Space Marine Legions.

The Volkite Culverin is the heaviest and most potent man-portable iteration of all Volkite technology, and was used by the ancient Legiones Astartes Legion Heavy Support Squads and their Contemptor Pattern Dreadnoughts, which could mount two of these heavy weapons on a single arm.

The Volkite Carronade was a Volkite heavy weapon variant, mounted as the primary turret armament on the Glaive Super-Heavy Special Weapons Tank, a variant of the Fellblade. A Volkite Carronade could destroy large enemy targets in a single sweep.

The Volkite Chieorovile was a Volkite heavy weapon variant used by the Questoris Knight Styrix. This devastating weapon can eliminate large numbers of enemy infantry at range.

The Volkite Demi-Culverin was a Volkite heavy weapon variant mounted as the primary turret armament on the Leman Russ Incinerator tank. A powerful weapon dating back to the Age of Technology, the Demi-Culverin could tear through infantry squads with ease.

The Volkite Sentinel was an automated, slaved weapon systems controlled independently by its own servitor-brain. Volkite Sentinels were used as defensive weapons found on a number of larger Mechanicum war engines, most commonly the Triaros Armoured Conveyer.

The Volkite Incinerator was a powerful purpose-designed Volkite ray weapon that was mounted in the chest-unit of each Ursarax Tech-Guard, allowing it to both attack its victims at range with a lethal Volkite beam and also by grabbing its foe within its claws and drawing them in to suffer the full brunt of this discharge at point-blank range.

This confined ray blast was particularly devastating in its power and was able to disintegrate even heavily armoured warriors in mere moments at such short range.

A Volkite Falconet is a directed energy thermal beam weapon similar in operation to other Volkite Weapons that could be deployed on the Deredeo Pattern Dreadnought. With the application of extreme heat it causes the flesh of its targets to explosively burst into ash and flame, laying waste to enemy hordes.

A Volkite Veuglaire is a Volkite Weapon deployed on the Knight Moirax. These ancient weapons are a rare sight even amongst the most venerable of Knight households, for their complex mechanisms are often beyond the ability of simple Sacristans to repair. But for those houses that still operate them, Volkite Veuglaire are prized for their ability to clear light infantry from the battlefield in a blaze of scintillating directed energy beams. 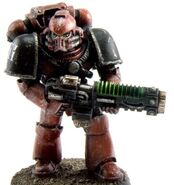 A Volkite Carronade used as the primary turret weapon on an Iron Hands Legion Glaive super-heavy tank of the Horus Heresy era. 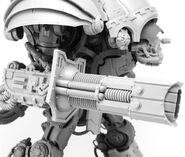 A Leman Russ Incinerator tank armed with a Volkite Demi-Culverin as its primary turret armament. 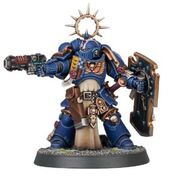 A Primaris Lieutenant of the Ultramarines armed with a Neo-Volkite Pistol, a reinvention of Volkite Weapons technology created by the genius of Archmagos Dominus Belisarius Cawl.
Español
Community content is available under CC-BY-SA unless otherwise noted.
Advertisement