"None can escape our wrath!"

Dark Blue, White and Copper
The Void Tridents is a Loyalist Space Marine Chapter comprised entirely of Primaris Space Marines created from the lineage of the Ultramarines and raised during the Ultima Founding of 999.M41.

Recruited from the Ocean World of Talassar in the Realm of Ultramar. The Chapter's warrior culture is strongly tied to the naval traditions of that world, which translates in combat-doctrine terms to a mastery of void-ship to void-ship warfare, boarding actions against orbital fortifications, low-gravity warfare and drop invasions of enemy-held worlds.

However, under the command of Lord Commodore Theodro Vethrus, the Void Tridents have also proven themselves to be expert at planetary assaults.

The Void Tridents are one of the Chapters who have been assigned to protect the enlarged Realm of Ultramar in the wake of the Plague Wars by Lord Commander of the Imperium Roboute Guilliman.

The Void Tridents wear the dark blue of the southern Talassarian oceans echoed in their Mark X Power Armour. The Aquila or Imperialis on the chest is copper, as is the shoulder pauldron trim and the helm. The inset of the right shoulder pauldron is white.

The Chapter's colours are reminiscent of the strong naval traditions of its homeworld of Talassar -- the blue represents the sea, while the white and copper are both maritime colours, the white of a ship's sails and the copper of its fittings.

Chapter markings and unit designations are red. The red squad specialty symbol -- battleline, close support, fire support, Veteran or command -- is displayed on the right shoulder pauldron, while the inset of the left shoulder pauldron is red and proudly displays the Chapter's iconography.

The Void Tridents' Chapter badge is a red trident pointed upward, centred on a field of white.

Void Trident armorials; the role and squad markings are shown on the right pauldron, while the Chapter symbol is displayed on the left 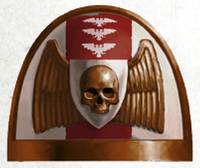 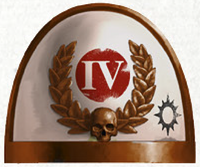 Void Trident armorial; the astral halo, displayed alongside the laurel, is worn by warriors who have fought a boarding action that resulted in a total ship kill