— Dictatus Vindicare, the maxim of the Vindicare Temple

The Vindicare Temple is one of the temples of the Officio Assassinorum. The motto of the temple in High Gothic is Exitus Acta Probat, "the Outcome Justifies the Deed."

Vindicare operatives are the most skilled snipers and marksmen in the Imperium of Man and are usually directed to assassinate targets who are believed to have been possessed by daemonic entities or to have been corrupted by the Ruinous Powers of Chaos.

"One or a thousand, I will kill them all."

Like the other temples of the Officio Assassinorum, the Vindicare Temple was originally the Vindicare Clade, created sometime during the Great Crusade in the late 30th Millennium at the behest of Malcador the Sigillite, the Regent of Terra, who was secretly the Grand Master of Assassins and Assassinorum's first Director Primus, known to the Vindicare Assassins only as "Sire Vindicare."

The Vindicare Clade was established in a secret location on Terra at the direction of the Grand Master of Assassins and was tasked like all of the other Assassin Clades with killing those who opposed the formation of the Imperium of Man and the will of the Emperor of Mankind.

During the Horus Heresy it provided members to the secret Execution Force that contained six Assassins from all six Clades of the Officio Assassinorum to try and eliminate the Warmaster Horus. This mission ultimately failed, much to Mankind's ill fortune.

In one celebrated but ultimately classified engagement, a massed Asuryani assault in the Lammas Campaign was halted by a lone Vindicare Assassin hiding in a ruined tower. The Asuryani advance in the face of this tower was stalled by a hail of deadly sniper fire which slew Exarchs, Warlocks, and support weapon crews in quick succession.

Eventually, the Craftworld Aeldari called in their scouts to clear the tower, but when they entered the ruin they found the Assassin long gone but the tower full of grenade-laden traps that offered yet more death.

The most prominent feature of the Vindicare Temple of the Officio Assassinorum is that it trains its subjects to near-perfection in the art of marksmanship; they aim to kill the Emperor's worst enemies with a single bullet.

In addition to the art of sniping, Vindicare Assassins are also trained in stealth and evasion techniques in order that they may get into the most advantageous position from which to take their shot and to successfully elude capture and disappear once their target is eliminated.

The necessity for these skills is determined by the fact that a kill can only be made from the best position. Indeed, Vindicare Assassins have been known to occupy a position for solar days, or even weeks, before taking their shot.

The Vindicare are often employed in eliminating individuals for the Imperium who are suspected of harboring daemonic entities. The hope is that they can eliminate the host before the Daemon is able to manifest itself on the material plane.

Characters of great charisma, many false prophets and false messiahs among them, have fallen to the Vindicare's bullet, most commonly whilst they are preaching their false beliefs to their followers and spreading heresy against the Imperium.

Upon this swift, brutal, and yet simple death, the erstwhile followers of such a Heretic soon become disheartened and afraid. Countless heresies against the Imperium have been prevented with a single, well-aimed shot where legions of men would have failed.

"One strike from the shadows, and I can change the tide of battle."

The signature weapon of the Vindicare Temple, this rifle is amongst the finest examples of Imperial weaponsmithing. Hand-crafted by a magos-artisan of the Adeptus Mechanicus, each Exitus Rifle is part of a matched set—both pistol and rifle customised to the specifications of the individual Assassin.

Perfectly-balanced, individually-crafted, an Exitus Rifle will never jam, never overheat, never fail or falter. The Exitus weapons contain sophisticated Machine Spirits that are sleek and murderous, an echo of the Assassin who wields the weapon, and in its owner's capable hands their rifle has sealed the demise of countless Heretics.

The Exitus weapons utilise ammunition constructed from special heavy-gravity alloys to penetrate nearly all forms of known protection. With the phenomenal killing power to punch through ceramite plate, the Exitus Rifle can drop a Chaos Space Marine with a single well-placed shot. All Exitus weapons incorporate a silencer and a selector switch. The Exitus rifle has a built-in telescopic sight.

Vindicare Assassins are also issued a high-powered weapon known as an Exitus Pistol for close-quarters work, if necessary. The Exitus Pistol is a masterpiece of craftsmanship, a weapon as elegant as it is deadly.

Unlike the larger rifle, the Exitus Pistol is mainly considered a backup weapon for a Vindicare Assassin, primarily used in those rare circumstances where the Assassin is discovered, cornered, or in need of rapid-fire capability.

Under those circumstances, the Exitus Pistol performs admirably, and more than a few Vindicare Assassins owe their lives to this weapon. An Exitus Pistol has the power to punch a grown man through an armaplas wall. The recoil from an Exitus Pistol is such that only a Vindicare's enhanced musculature allows them to fire the weapon one-handed.

Of course a Vindicare has no problem doing so, their accuracy and rate of fire so great that they can empty the weapon's magazine, every shot a kill, before their victims' guns have even cleared their holsters. The Exitus Pistol has a built-in silencer and is among the highest quality weapons crafted by the artificers of the Imperium of Man.

Exitus rounds can also be programmed to self-destruct. The rounds are disintegrated, consumed as if destroyed by a virus, and leave no trace behind.

Vindicare Assassins are normally issued special ammunition when sent on an assignment. These unusual rounds are very rare, and each is extremely difficult and time-consuming to craft.

Therefore, the Assassin is usually given a single round of each type. Occasionally, other special rounds (such as the Hyphosphus Incendiaries) are issued in their place. The ammunition described below may only be utilised by the Exitus Rifle and the Exitus Pistol:

This item of Vindicare wargear appears as a matte-black bodyglove, specially fitted for the individual Assassin. The Vindicare Temple has a long-standing pact with the Adeptus Mechanicus to craft these exquisite suits, each one combining Cameleoline-laced materials with a complex version of "synskin" to allow its wearer to blend in with his environment.

This material bonds with the Assassin's body, enhancing his reflexes and protecting him from poisons, gases, and other hazards of the battlefield.

Each suit is supple and silent, allowing the Assassin to move with perfect freedom whilst still retaining its protective and chameleon qualities.

It should be noted that the wargear of a Vindicare Assassin is often gene-coded to that individual and no other, and that it would take a great deal of effort to adjust the gene-coding for another user.

Issued to Imperial Assassins of the Vindicare Temple, this item's systems are incredibly advanced and sophisticated. It is said that the design for the Spy Mask is little-understood even by the Tech-priests of Mars.

Internally moulded to the contours of a Vindicare operative's facial features, each spy mask interfaces directly with the operative's cerebellum via neural jacks located at each temple. Thus integrated, the spy mask's sensorium suite and predictive augurs exload data straight into the Vindicare's mind.

Trajectories, atmospherics, thermal imaging, psychic spoor, all are superimposed directly onto an operative's field of vision. The mask allows the Vindicare to see through dense smoke, driving snow, and can even identify likely weak points in their victim's defences, based upon intel inloads and probability scripture.

This avalanche of information would disorient even a Veteran Space Marine, but thanks to a Vindicare's mental augmetics, they can process it all with ease.

The Spy Mask also contains cartridges of concentrated food and water for extended operations, and a multi-channel communications sensor (both vox and pict) for monitoring enemy communications.

Like their stealth suit, a Vindicare Spy Mask is also gene-coded so that it can only be activated by a specific Assassin.

In the real-time strategy games for the PC Dawn of War - Winter Assault and Dawn of War: Dark Crusade, the Vindicare Assassin (simply called the Assassin in the game) is the Imperial Guard's only infiltrator unit, armed with a high-powered Sniper Rifle.

Imperial Guard commanders can temporarily double the range and damage of the Vindicare's sniper rifle by ordering the unit to activate the rifle's Assassination Scope for a limited time (as prolonged use of the scope causes the rifle to overheat). 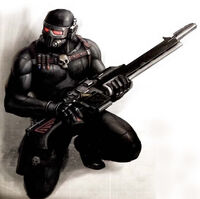 A Vindicare Assassin waits for the shot.

The primary wargear of a Vindicare Assassin, an Exitus Rifle and Exitus Pistol. 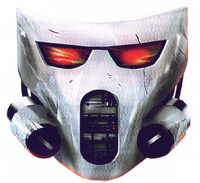