A Vexilus Praetor is a veteran of one of the Shield Companies of the Adeptus Custodes, the elite bodyguard of the Emperor of Mankind, who bears aloft a proud standard known as a Magisterium Vexilla or simply a Vexilla, to war. More than just standards to inspire adulation or terror, a Vexilla's built-in technologies provide invaluable battlefield support to the Custodians fighting in their shadow. Each Vexilla is created on Terra, painstakingly fashioned over a period of one hundred Terran years by the oath-sworn artisans of the Tower Aquilane. Each Vexilla is a towering banner topped with the Imperial Aquila, the ultimate symbol of the Emperor's authority.

Upon their completion, these beautiful standards are borne amidst processions of craft-thralls, Adeptus Ministorum Priests and heraldic Servitors to the Auric Eyrie, where they are held upon stasis-podia until required. Some Vexillas are purely ritual in purpose, and are carried in procession and parade through the endless leagues of the Imperial Palace. Most, however, incorporate potent technologies suited specifically for deployment upon the field of battle.

The Adeptus Custodes are a glorious and much celebrated force. In the earliest days of the Imperium they marched to war alongside the Emperor Himself, presenting a magnificent spectacle which echoed the majesty of the Master of Mankind. Just as their weapons and armour have always been fashioned to reflect His martial glory, so too are the proud standards known as Vexillas, which are borne to war by some of the most veteran Custodians.

The Custodes alone are permitted to display it as their foremost heraldic icon, and its inspirational effect upon those around them is nothing short of electric. Hefted high above the anarchy of the battlefield, the Vexilla forms a golden beacon of truth and light that fills true servants of the Emperor with awe. Beneath the winged shadow of the Aquila, even the humblest defender of Humanity feels the touch of the Emperor upon their soul. Meanwhile, the enemies of the Imperium cower in dismay; dread clouds their minds and saps their strength at the thought that the Emperor's greatest warriors are poised to tear them apart.

Those Vexillas carried by the veterans of the Shield Companies typically belong to one of several patterns. Most common is the Vexilla Imperius, the mere presence of which fills nearby Custodians with inviolable determination and lends fresh strength to their limbs. Whether this effect is purely psychological, or if there is some crypto-technological aspect to the phenomenon, is unknown beyond the Tower Aquilane. It is enough that it works, and works well.

The Vexilla Defensor is borne into battle where the foe brings overwhelming firepower to bear. Built into this proud standard is a refractor-field generator of prodigious power, whose protective umbrella crackles out to ward all nearby allied forces from harm. The deployment of these Vexillas has spawned more than one legend and parable; to the unenlightened, the effects of the Vexilla Defensor look as though the Emperor is extending direct protection to those who fight at the side of his favoured warriors.

The Vexilla Magnifica incorporates photophantasmic fluctuators and psycho-amplifactor clarions. Those who dare to assail its bearer or his comrades find themselves blinded by the searing radiance of the Emperor’s glory, their gunsights rebelling and their optic nerves burned out even as their thought patterns are smashed to fractal shards. Such standards are borne at the forefront of an attack, placed where they can best blunt any attempt by the foe to launch a counter-offensive of their own.

In addition to these technological marvels, all Vexillas incorporate Empyrically-hardened Teleport Homers. These are most commonly used by the Adeptus Custodes to call in sudden strikes by fresh waves of Custodians, or, on rare occasions, even summon a Contemptor Dreadnought or Venerable Land Raider from the especially large, ancient and powerful Godstrike Pattern teleportariums aboard their warships. Whether blunting the enemy's sudden assault, exploiting a breakthrough in the foe's lines, or wrong-footing their victims with a sudden shift in the flow of the battle, such technology has many uses for the Ten Thousand, and fits perfectly with their style of warfare. Combined with the inspirational effect they have upon allied Imperial forces, and the Vexilus Praetor's own veteran combat skill, it is easy to see why few Shield Companies march to war without Vexillas rising proud above them. 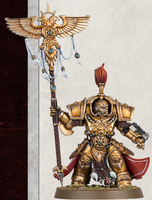 A Vexilus Praetor arrayed in powerful Allarus Pattern Terminator Armour.
Add a photo to this gallery
Retrieved from "https://warhammer40k.fandom.com/wiki/Vexilus_Praetor?oldid=322977"
Community content is available under CC-BY-SA unless otherwise noted.