"Watch the flanks for these xenos my brothers, for death is heralded by the sound of their wings."

The Vespid are a unique race of insectoid aliens who are members of the T'au Empire.

In the T'au Lexicon, they are called "Mal'kor." This derives from the T'au words for insect, "Mal," and air, "Kor."

The soldiers of the Imperium of Man often refer to them as "Stingwings." The Vespids' homeworld is a gas giant called Vespid, three light-years to the galactic south of the T'au's D'yanoi Sept.

When the T'au first encountered the Vespids, they saw a species of great potential value to the Greater Good and came to greatly covet their crystal-based technologies.

Although the species had developed a reasonably stable planetary government and were able to utilise its advanced technology for a wide variety of uses, it had not yet achieved space flight.

T'au Water Caste cadres established contact yet were unable at first to communicate with the species. This was not a mundane matter of vocalisation or the understanding of language, for the Vespids have an utterly alien mindset. Initially, the T'au were not only unable to communicate but incapable of getting the Vespids to even register that they were fellow sentients. As a result, little progress could be made beyond crystal trade agreements.

The matter was eventually resolved at the command of the Ethereal Caste, who issued instructions for the construction of an interface device that forged a connection between the two species and facilitated communication.

The moment the device was employed, the Vespid not only registered the T'au as fellow sentients, they instantly understood the concept of the Greater Good and their place within it.

By gifting senior Vespids with "Communion Helms" fitted with the interface device, the T'au are able to communicate with the species at large. The will of the T'au Ethereals is disseminated to those Vespid under the command of these "strain leaders," and they become able to decipher their role as befits the Greater Good. Needless to say, certain factions within the Inquisition would very much like to learn more about the workings of this Communion Helm device.

The Vespid are a vaguely insectoid species, though this narrow term is an imperfect one that fails to account for many aspects of their unusual physiology.

Their bodies are encased in a chitinous exoskeleton and sport many lethally sharp barbs. They see by way of three pairs of eyes, one pair perceiving the ultraviolet range, one the normal visible light spectrum, and the last the infrared.

It is assumed that the Vespids see in all three ranges of the electromagnetic spectrum simultaneously, and therefore have a perception of their surroundings unique to their species.

The Vespid possess a pair of extremely sensitive antennae that constantly collect information from their surroundings. Vespid claws are described as being diamond-hard and are used to tunnel into rock to create their hives.

Vespids can fly by way of a pair of hard chitin wings, which also emit a continuous ultrasonic tone with which the species appears able to modulate and control the workings of their crystal-based technology.

The world of Vespid is a gas giant, its dark, violet-hued skies wracked by continuous and violent storms. This environment would appear an unlikely crucible for any form of life, let alone a sentient species, but the Vespid are far from conventional in their biology.

The upper layers of the planet's atmosphere are host to many thousands of floating islands of rock, kept aloft by lighter-than-air gas trapped within. The islands are flat-topped and become narrower towards the base, giving them the appearance of vast, floating stalactites.

The Vespids make their homes within these structures, using their diamond-hard claws to hollow them out like termite mounds. Because the islands are so large, the air pressure varies significantly between topmost and bottommost levels.

The lower levels are host to all manner of exotic and unique types of crystal, which only the larger female Vespids have the constitution to reach and harvest.

These crystals are the basis of the species' technology, one type of which is used in the construction of the deadly Neutron Blaster utilised by the race's Stingwing warriors in battle.

Vespid forces working with the T'au Fire Caste are organised into warrior squads called Stingwings. These squads use their diamond-hard claws and Neutron Blasters to harass enemy heavy infantry such as Space Marines and Ordo Tempestus Storm Troopers.

The Stingwing commanders, called "Strain Leaders," wear Communion Helms, gifted to them by the Ethereal Caste, which allows them to keep in contact with both Shas'Ar'Tol command and the other members of the Strain.

One cultural trait the Vespid share with the T'au is that, like the T'au, the Vespid are highly deferential to their leaders, obeying them without question.

The Vespid, unlike the mercenary Kroot, believe in and fight for the Greater Good alongside their T'au allies, which brings a sort of camaraderie with the rest of the T'au Empire's multispecies armed forces that the Kroot do not share.

Conversely, there exists an unspecified "cultural incompatibility" between the Vespid and the Kroot, causing the two species to engage in only limited contact with each other.

A Vespid Stingwing in combat. 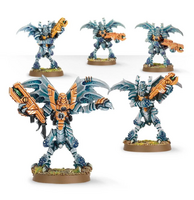 A squadron of Vespid Stingwings.
Español
Community content is available under CC-BY-SA unless otherwise noted.
Advertisement