"I fought atop the walls of the Emperor's palace when the Great Beast's WAAAGH! crashed against them. There I fell, yet was reborn in this ageless body of auramite. I fought upon the battlefields of Ghosaris during the Moirae Schism, and crushed the servants of the Dark Mechanicus without mercy. I stood immovable in the face of the Blood Cults of Tsydon, and slew all who came against me. Still I fight, and so shall I always, for my debt to the Emperor shall never be paid."

A Venerable Contemptor Dreadnought of the Custodian Guard is a revered relic of the Imperium of Man's golden age. Each houses a fallen hero of the Adeptus Custodes, a warrior broken in body but not in mind who has opted to fight to his last breath. Interred within the cold, dark confines of a cybernetic life-support sarcophagus, the Custodian becomes a god of war, able to stride unharmed through hails of fire and crush the Master of Mankind's foes with their hydraulic might.

Articulated in the manner of a human warrior, the Contemptor fights with a deceptive dexterity for its size -- onward it pushes, its heavy weapon system laying down a swathe of deadly fire. At close quarters, sweeps of its Dreadnought-sized Power Fist crush infantry to paste and tear their war engines apart to leave naught but wreckage behind.

Bellowing a Vox-amplified war cry, the Venerable Contemptor Dreadnought storms into the enemy with merciless fury. Heavy fire spits from its gun arm -- either blasts of melta energy that reduce tanks to molten ruin or screaming hails of shells from the spinning barrels of its Kheres Pattern Assault Cannon. The Dreadnought's other arm ends in a fist like a wrecking ball, a gilded gauntlet that can tear the turret from a battle tank or splinter every bone in a body with a single punch. Wielding these weapons with a matchless skill characteristic of the Adeptus Custodes, the Contemptor blazes a trail of death and destruction through its enemies, tearing the heart from those who would stand against the Emperor and sending the terrified survivors fleeing in terror.

Each Venerable Contemptor Dreadnought is an ancient war engine, a relic that incorporates wonders of technology that the Imperium can no longer replicate. Its auramite armour plates are expertly crafted and maintained. Its limbs are articulated by fibre-bundles and servo-motors that afford it immense strength. Its weapons are perfectly calibrated, while its hull is sheathed in the crackling energies of an atomantic shield that can dispel laser blasts and artillery shells amidst bright flares of energy. Auto-repair protocols allow the Dreadnought to shrug off crippling battle damage, while motive shrines and auto-sanctified backup systems stand ready to take the strain should the Contemptor undergo serious combat trauma. Yet for all this arcane technology, the most important component of the Venerable Contemptor Dreadnought is the living warrior interred in the sarcophagus at its heart.

Though the physiology of the Custodians is remarkably durable, still there are wounds so severe that even they cannot survive them. When faced with certain death, a Custodian may choose to be preserved within a Venerable Contemptor Dreadnought so that he can continue to fight for the Emperor. There should be no mistaking that this is the act of a martyr, for life within a Dreadnought sarcophagus -- even one as advanced as the Venerable Contemptor -- is a twilight existence at best. The pilot is shorn of all unnecessary flesh, rendered down to little more than a sack of organs and brain matter sustained within an armaglass amniotic tank. They are then permanently fused with the life-support systems of the Dreadnought. Its powerful limbs become theirs to operate. Its complex sensoria become their eyes and ears, its Vox emitter their mouth. In return, they face an eternity cut off from the outside world, bound to mechanical systems that can never truly replicate the feel of sunlight upon their skin, or the satisfying crunch of their blade through an enemy's flesh.

Despite this, there are tales of unharmed Custodians volunteering to pilot Contemptors whose previous occupants were slain in battle. Those soon to depart as Eyes of the Emperor, those who feel they have dishonoured themselves, even warriors who simply will not turn aside from what they perceive as their duty; all, it is said, have given their flesh willingly so that the Contemptor Dreadnoughts of the Custodes continue to stride to war.

A Venerable Contemptor Dreadnought can replace its Multi-Melta with the following: 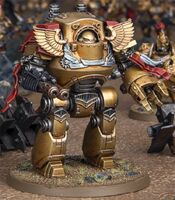 A Custodian Venerable Contemptor Dreadnought blasts the enemy with the super-heated energies of its Multi-Melta.
Add a photo to this gallery
Retrieved from "https://warhammer40k.fandom.com/wiki/Venerable_Contemptor_Dreadnought?oldid=348568"
Community content is available under CC-BY-SA unless otherwise noted.