The Vendetta is a heavy gunship of the Imperial Navy and is a variant of the Valkyrie airborne assault carrier primarily used as a tank-buster. The Vendetta is a Vertical Take-Off and Landing (VTOL) aircraft and is primarily used as a transport for airborne combat regiments such as Imperial Storm Trooper Squads and soldiers of the Elysian Drop Troops Regiment. The Vendetta's armament is designed to effectively combat enemy armoured units. The Vendetta is also used as heavy air support for Imperial ground forces, as the aircraft is capable of staying on-station once its troops have been dropped to provide heavy air support against enemy armour.

The Vendetta is heavily armed with anti-armour weapons, including two sets of Twin-linked Lascannons on its wings and one set of Twin-linked Lascannons located near the cockpit. The aircraft also possesses two door-mounted Heavy Bolters to be used for covering fire when dropping off its precious cargo of Imperial troops. The Vendetta can replace the wing-mounted Twin-linked Lascannons for two Hellfury Missiles. The aircraft can also be equipped with two sponson-mounted Heavy Bolters for added firepower. The Vendetta can be enhanced with ejector seats, extra armour for the cockpit, flare or chaff launchers, infra-red targeting systems, and illumination flares. Despite the impressive firepower of the Vendetta, it lacks the flexibility of the Vulture Gunship, which is often chosen over the Vendetta for deep-range attacks and urban assault missions.

Known Users of the Vendetta 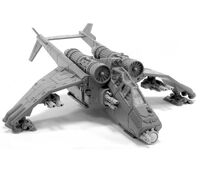 A Vendetta Gunship as seen from the front 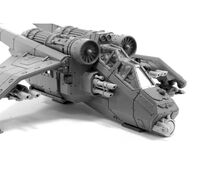 A Vendetta Gunship as seen from the front-right 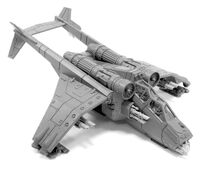 A Vendetta Gunship as seen from the top right
Add a photo to this gallery
Retrieved from "https://warhammer40k.fandom.com/wiki/Vendetta?oldid=95187"
Community content is available under CC-BY-SA unless otherwise noted.