"Each path must be chosen with care, lest disaster swallow us whole."

Varro Tigurius is the Chief Librarian of the Ultramarines Chapter of the Space Marines. As a psyker, Tigurius has always stood apart from his Battle-Brothers. Even to the company Captains of the Ultramarines he is a figure of mystery, possessed of a knowledge that goes beyond the towering datastacks and myriad scrolls of the Chapter's Arcanum. Little is hidden from the Chief Librarian's sight, and many of the Astartes amongst the Ultramarines believe him to be guided by the Emperor's own hand. Tigurius is unique among Librarians, for he has displayed the precognitive capability to foresee events, even on the tactical level, before they have come to pass, revelations of the future that usually come to him in the form of waking dreams and powerful premonitions.

In Tigurius' eyes, there is nothing more dangerous than incomplete knowledge nurtured by a mind unready to accept its consequences. As such, it is not uncommon for Tigurius to meet a question with a question until he is satisfied that the asker has fully grasped the deeper meaning and consequences of the information bestowed. This practice has been a cause for tension on more than one occasion between the Chief Librarian and the Ultramarines Chapter's Captains, for most Astartes seldom have time for such things as introspection.

Tigurius rewards those who persevere in their interrogations with an insight so incisive that it borders on prescience, spawned and honed by a lifetime's dedication to the accumulation of knowledge. Little is hidden from the Chief Librarian's sight, and many amongst the Ultramarines believe him to be guided by the Emperor of Mankind's own will.

It was through this foresight that the Ultramarines were able to end the Ork WAAAGH! Madbrakka, its ramshackle fleet blasted to atoms the instant it emerged from the Warp. The Chaotic Warmaster Niadar met with scarcely greater success. Only one of his ships made planetfall on the cavern world of Calth, and the greatly weakened surviving force of Chaos Space Marines fell swiftly to the Ultramarines' 3rd and 8th Companies.

Tigurius' unusually powerful psychic gift might be treated with suspicion and perceived as a stigmata of unholy associations with the Ruinous Powers, yet none who have witnessed the Chief Librarian in battle can find cause to doubt his allegiance. In combat the Chief Librarian's silent manner falls from him like a shroud, replaced by the aggression and strength of a warrior born. This was best illustrated during the Ultramarines 4th Company's excursion to the world of Boros, where Tigurius unleashed psychic hellfire upon the Ork horde that was present on that world and allowed the 4th Company to claim victory over a much more numerous foe.

Varro Tigurius is also one of the few living beings to have witnessed the Legion of the Damned in action. His report, one of the most acurate depictions of he Legion of the Damned in the Imperial archives next to that of Chapter Master Zacharias Kersh of the Excoriators Chapter, reported how these macabre undead Space Marines appear seemingly at random when all seems lost; rout the enemy with incredible displays of martial valour and ultimately vanish again without leaving a trace. Since that encounter, Tigurius has attempted to divine who or what these strange warriors were, but without success.

Tigurius has recently turned his talents to divining the threat of the Tyranids. His predictions about their movements have been so accurate that it would appear he has been able to psychically contact the Tyranid Hive Mind -- a feat that has driven lesser individuals irreparably insane. If this is true, then Tigurius will have proved himself the most powerful psyker in the Imperium of Man, after the Emperor of Mankind, rivalling even Mephiston of the Blood Angels.

Tigurius makes use of the best wargear the Ultramarines Chapter has to offer, making him an even more potent foe for the enemies of Mankind than most Astartes Librarians. His wargear includes: 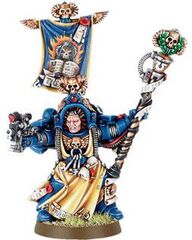 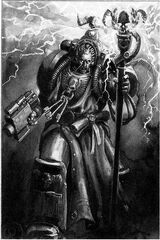 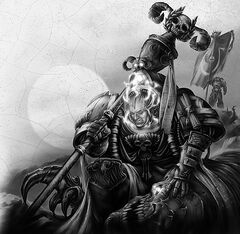 Varro Tigurius uses his psychic abilities to gain information from a fallen foe
Add a photo to this gallery
Retrieved from "https://warhammer40k.fandom.com/wiki/Varro_Tigurius?oldid=128772"
Community content is available under CC-BY-SA unless otherwise noted.