A Varagyr Wolf Guard Terminator Squad, or simply the Varagyr, was an elite, exclusive formation of Veteran Marines who served as both personal advisors and the Honour Guard to Leman Russ, the Primarch of the Space Wolves Legion during the Great Crusade and Horus Heresy eras in the late 30th and early 31st Millennia.

The Varagyr served as the prototypes for the Wolf Guard formations of the later Space Wolves Chapter after the Second Founding.

The Varagyr, rendered sometimes as "Varangii" in Imperial records, or more literally "Wolf Guard," were the chosen warriors of Leman Russ, hand-picked from his own Great Company to form his personal Honour Guard and close companions in war and council. When Leman Russ was rediscovered by the Emperor's own Principia Imperialis expeditionary fleet on the Death World of Fenris, he was swiftly sent to command the VI Legion, but he did not go alone.

With Leman Russ went as many as several hundred Fenrisian warriors who had, despite their age, undergone and survived the implantation and gene-processing required to become Astartes, at least to the greater part. Many had died in the attempt, but far less than might have been expected.

These men were to be Leman Russ' first Varagyr. They were Russ' oath-bound warriors, sworn to him even if it meant denying the jaws of death to be at his side, and whose loyalty had seen them leave their world of ice and blood and ascend uncomprehendingly but undaunted to the stars in their lord's footsteps.

These Varagyr were valued by their king for this loyalty over the might of the transhuman Astartes of the VI Legion he was given to command, despite their vaunted strength and savage reputation, for they had not yet proven themselves as warriors or earned his respect.

Leman Russ ordered the Varagyr to be dispersed partly through the ranks of his Legion, which was cause for some resentment, but it was quickly made known that Russ' rule was not to be questioned, and that the Varagyr were more than willing to offer themselves in single combat to decide any argument over the matter.

Following the successful Wheel of Fire campaign, the VI Legion of old and its newly inducted Fenrisian brethren had been forged anew in the fires of war. For the survivors of the old Terra-born VI Legion and what remained of the first Varagyr, Fenris had become home for both, for during the trials of that great campaign, all had indeed come to adopt both the elements of Fenrisian culture their Primarch embodied and its martial traditions.

The dark wisdom which the Varagyr brought with them found favour with those in the Legion who wished to be close to their gene-sire, just as the Fenris-born embraced new weapons and ways of war more fitted to the vast and unimaginable battlefields they now prowled across.

The 1st Great Company (or "Onn" Company in the Fenrisian dialect) which served as Leman Russ' core of Veterans, included his chosen elite, the Varagyr. To attain such a rank and position, each had distinguished himself in battle many times over, and each had forged his own saga worth the telling. More so than any other of his sons they were the wolves of his pack, marked by the great beast pelt which adorned their armour.

To adopt this honour meant more than simply to walk in the Wolf King's shadow and lay down their lives for him. It meant that at least for a time these warriors had foregone the chance to lead their brothers in battle, to watch while others struck, to stand fast and not seek out the glory of battle save when their lord commanded.

When such coldly withheld fury was unleashed, however, it fell like a thunderbolt against the foe. The charge of the Varagyr was terrible to behold, a tide of armour-clad, beast skin-draped hulks propelled by superhuman strength and inhuman ferocity. Given sufficient momentum to aid their charge, the Varagyr struck their foes like cannon shells, crushing and killing their enemies before even their fearsome blades struck.

Though all served the Wolf King faithfully and with fealty as his guard, the Varagyr also took great satisfaction in showing their superiority to the petty lords and champions of those they slew, vying to honour their master with the trophies of the slain justly anointed in the blood of the vanquished in the hopes of making a tale worth the telling. 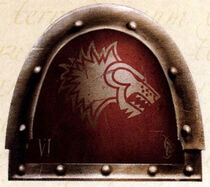 A Space Wolves Legion armorial with "Varagyr" command variant iconography
Add a photo to this gallery
Retrieved from "https://warhammer40k.fandom.com/wiki/Varagyr?oldid=354605"
Community content is available under CC-BY-SA unless otherwise noted.