A Vanguard Space Marine is a Primaris Space Marine who serves as a covert operator. These Primaris Astartes are ruthless killers, trained to operate behind enemy lines as saboteurs, assassins and infiltrators.

Vanguard Space Marines are not a single unit, but several different types of squads who perform different tactical roles for an overall Vanguard force.

The entire Vanguard Marine force of a Codex Astartes-compliant Space Marine Chapter is normally contained within the 10th Company and is commanded by the Captain who bears the title of Master of Reconnaissance.

First deployed en masse during the Indomitus Crusade after the formation of the Great Rift, Vanguard strike forces proved fearsomely effective at their tasks of reconnaissance-in-force, infiltration and sabotage. As Primarch Roboute Guilliman's forces pushed ever further into Chaos-­infested space, the Vanguard Space Marines fought ahead of the advance, dismantling the foe's ability to resist the Imperial war machine.

The Khornate warlord Ul Ghresk fell victim to a volley of precision bolt rounds at the Battle of Eight Pillars, sending his Fleshreavers into a self-destructive frenzy. The corrupted spaceports at Braxar Tertia were destroyed when a series of detonations broke apart their grav-locked moorings, causing the entire structure to smash down upon a Chaos mustering ground.

Upon the Heretic-held Forge World of Drianturn, the Chaos Titan Degradator was drowned in burning promethium when a series of sump dams mysteriously malfunctioned. Across contested space, countless similar acts of covert destruction were carried out with peerless skill.

Such was the disorder caused by these strikes that several internecine conflicts were ignited between rival Chaos factions who blamed one another for the baffling attacks that were crippling their forces. Terror and confusion, two of the greatest weapons of the Dark Gods' followers, were now being employed against them, and the results were devastatingly effective.

As the Indomitus Crusade delved deeper into enemy territory and was struck by multiple Chaos counter-­assaults, the Vanguard Space Marines seamlessly fell back to support their Battle-Brothers, launching flanking assaults and withering the foe's forward units with unrelenting sniper fire.

Finally, the enemy came face-to-face with the hidden menace that had haunted them for so many solar months. Reiver Squads burst from the shadows, Vox-augmented masks howling blood-curdling battle cries as they fell upon the foe with Heavy Bolt Pistols and Combat Knives. Eliminators stalked the shadows, every shot from their silenced Bolt Sniper Rifles a kill.

Vanguard Space Marines proved no less devastating when fighting in concert with battle line troops than they had been while carrying out aggressive reconnaissance actions.

Indeed, so impressed was Guilliman with the performance of his Vanguard formations that he made a number of amendments to the Codex Astartes -- his legendary thesis on warfare -- in order to better accommodate them into the Space Marines' overall tactical doctrine.

In the years since, Vanguard Space Marines have continued to perform a vital role in the defence of the Imperium. With violent Warp Storms covering almost half the known galaxy in a veil of darkness and fear, dedicated reconnaissance forces have proven vital for the Adeptus Astartes.

Vanguard strike forces delve into the deadliest reaches of space, clearing the path for crusades of reconquest and retribution, harrying the forces of the Dark Gods wherever they are found.

Elite killers, saboteurs and terror troops who spread fear and ruin throughout the enemy's domain -- these are the Vanguard Space Marines, the first into battle and the last sight their enemies will ever see.

Precision and ruthless efficiency are the watchwords of the Vanguard Space Marines, and the silence of death is all that they leave in their wake. Performing duties ahead of the main battle line, these forward operatives sow discord and panic throughout the enemy force.

Key personnel are assassinated in sudden, devastatingly accurate salvoes of Bolter fire, communications outposts obliterated with macro-explosive charges. As the enemy reels, the Vanguard Space Marines slip away into the shadows, already seeking their next kill.

Vanguard Space Marines are reconnaissance and infiltration experts, equipped to operate alone in enemy territory for extended periods of time, and intensively trained in shadow warfare tactics and sabotage techniques. Vanguard strike forces are tasked with achieving full spectrum superiority over the enemy.

Every facet of the opposition's war machine must be dismantled, from supply routes and infrastructure to communications and logistics. Morale must be utterly sapped through non- stop harassment by terror troops and precision sabotage.

The ultimate goal of this relentless campaign is to leave the foe crippled and helpless before the advance of the main Space Marine battle line. Should they need to engage the enemy head-on, however, Vanguard formations are perfectly capable of doing so -- they are warriors of the Adeptus Astartes after all, armed and equipped with some of the deadliest wargear available to the Imperium.

No matter their current squad role, all Primaris Space Marines are trained and indoctrinated in Vanguard tactics, able to don patterns of Mark X Power Armour unique to the reconnaissance detachments as and when they are called upon. In addition, during their time in a Chapter's Scout Company, all Space Marines are fully trained in the use of Vanguard armour variants and associated wargear, in preparation for potential deployment behind enemy lines.

Battle-Brothers from a Chapter's Reserve Companies may be temporarily seconded to the foremost Battle Companies as Vanguard Space Marines, taking on the colours and markings of their new company for the duration of their service.

In accordance with those recent amendments to the Codex Astartes, the 10th Company of each Chapter should maintain a permanent complement of one hundred Vanguard Space Marines under the command of a Captain -- known as the Master of Reconnaissance -- and supported by two Lieutenants well-versed in reconnaissance-in-force and other special forces missions.

This standing force consists of hard-bitten Veterans who have displayed particular aptitude for forward reconnaissance-in-force warfare over the course of countless operations. It is their responsibility to ensure that when the Chapter enters battle it does so equipped with all relevant strategic data gathered from their covert scouting missions.

Even with this duty complete, the Vanguard Space Marines must stand ready at all time to reinforce or supplement the Battle Companies. Even those Chapters who are not Codex compliant and possess no dedicated Scout Company -- such as the Space Wolves or the Black Templars -- ensure that there is always a standing formation of Vanguard Battle-Brothers ready to carry out covert missions.

The Mark X Power Armour worn by Primaris Marines is a marvel in design -- a modular, adaptable system of ceramite plating that can be adjusted for multiple tactical roles, from the Phobos Pattern designed for scouting and reconnaissance and used by Vanguard Marines all the way up to the heavy Gravis variant worn by Aggressor Squads.

However, the Phobos pattern eschews a certain amount of ablative covering in favour of agility and speed.

Regardless of its pattern, Mark X Power Armour is designed to attach to a special undersuit worn by each Primaris Marine, enabling it to be fitted in different configurations according to need.

Amongst the Vanguard formations, there is no standard Power Armour style, though Mark X Phobos Power Armour patterns are most common due to the nature of their combat doctrine. However, each squad bears its own unique composition, tailored to its particular need.

The Phobos armour adopted by Vanguard Infiltrators and Reivers, in particular, is this lighter variation of the standard Mark X pattern that offers increased manoeuvrability and quieter, almost silent movement because of lighter armour plating and servo-motors that run almost completely silent.

Eliminator Squads utilise an even more stripped down version of the same Phobos armour pattern, allowing them to operate with maximum stealth as they stalk their prey.

On the other end of the scale are the Suppressor Squads, fire support warriors clad in Mark X Omnis Pattern Armour -- a fourth variant of the Mark X that is a blend of the heavier Gravis configuration and the lighter Mark X Phobos versions favoured by other Vanguard Space Marine units. 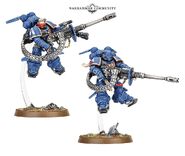 Vanguard Suppressors of the Ultramarines Chapter armed with Accelerator Autocannons. 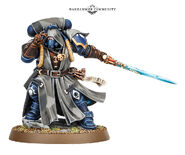 A Vanguard Librarian of the Ultramarines armed with a Force Sword and wearing a Camo Cloak. 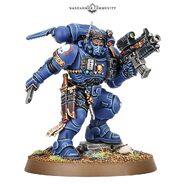 A Vanguard Lieutenant of the Ultramarines Chapter wielding his Occulus Bolt Carbine and Combat Knife.