— Air Marshal Zutrov before the Battle of the Borenza Gulf

The Valkyrie is a Vertical Takeoff and Landing (VTOL) airborne assault carrier used primarily by the Astra Militarum as both a ground support gunship and a transport for airborne combat regiments like Tempestus Scion Squads and the Elysian Drop Troops. Despite serving the tactical needs of the Imperial Guard, a Valkyrie and its crew are usually composed of pilots and armsmen drawn from the Imperial Navy's Aeronautica Imperialis and are provided to the Guard on an as-needed basis.

The Valkyrie assault carrier is a manoeuvrable, well-armed, twin-engine Attack Craft. The durable armour and versatile payload of the Valkyrie chassis combined with the aircraft's powerful engines and stable handling make it a popular choice for a broad spectrum of battlefield roles. These Attack Craft use atmospherically-sealed cockpits and omni-combustable Promethium in their vector-turbojets, allowing them to be deployed against enemy flyers in the upper atmosphere and against ground forces on even the most hostile worlds.

Sporting a troop transport capacity on par with the ubiquitous Chimera, the Valkyrie is often used to swiftly redeploy squads of infantry. Strikes at key targets by cadres of Tempestus Scions, reinforcement of buckling battle lines by grim-faced bands of Veterans, even hasty transportation for ranking officers -- all of these and more are the duty of the Valkyrie.

With a few notable exceptions, most Astra Militarum formations will have small numbers of Valkyries attached to them on a temporary basis; such aircraft are, first and foremost, the property of the Aeronautica Imperialis. During extended ground operations, however, they are usually repainted to match their assigned regiment, and their pilots report directly to that regiment's senior officer regardless of the difference in service.

With vectored engines permitting vertical take-off and landing, these versatile aircraft can twist and turn through the rigours of low-altitude dogfights, or hover while troops rappel from their holds. In addition, every Valkyrie is equipped with sufficient Grav-Chutes for all passengers, allowing expedient, if hazardous, high-speed deployment into the thick of combat.

To burst from the steel cocoon of a Valkyrie's transport bay into the icy air above packed ranks of enemies can be jarring, even by the standards of the Astra Militarum. As the chuted infantry descend towards the seething mass of foes they are peppered with fire. Those grav-troopers who manage to touch down may find themselves within feeding range of some mutated xenos monstrosity, or set alight by gouts of daemonic flame. But for all this, the shock of a Valkyrie drop is even more terrifying to the enemy, who find themselves fighting on new and unexpected fronts with no warning, other than the roar of an overflying Valkyrie. Carefully orchestrated offensives are thrown into utter disarray as Lasgun-wielding infantry are disgorged to assail the flanks and rear of the assaulting army. Artillery and psykers unleashing their destruction far from the front lines are surrounded and brought down by the massed fire of the descending troopers.

Valkyries have a storied history of service alongside Imperial infantry and armour regiments, and are sometimes referred to by Imperial Guardsmen as the "Wings of the Emperor." Certainly those Guardsmen who have seen a ravening Carnifex blasted apart from on high by a Valkyrie's Hellstrike Missiles, or been lifted from the path of an onrushing Ork horde in the tight confines of the transport bay, have nothing but respect for these exceptional aircraft.

Airborne assaults play a crucial role in the battle plans of many Imperial commanders. Due to the high risk of such manoeuvres, and the high reward of eliminating key enemy assets, it is common for Valkyries to be loaded with the best troops available -- Guard Veterans or Tempestus Scions. However, certain pragmatic officers have achieved decisive victories by using Valkyries to distribute rank-and-file soldiers across large swathes of the battlefield. One such Company Commander -- Jetta Bacchi of the Athonian 992nd "Vagrant Blades" -- has used Valkyries in multiple city fights across the Imperium to seed the battlefield with his Tunnel Rats before engaging the enemy. Once deployed, each Infantry Squad sets up choke points and ambushes across the zone of battle. The foe then faces an unenviable decision -- either move at a crawl trying not to stumble into the infantry's traps, or barrel ahead full pace to outrun the deadly rain of aerial fire unleashed by the Valkyries.

Even when troop transport is not required, or when the battlefield conditions make such actions impossible, Valkyries are still an invaluable aerial asset. Their armaments allow them to carry out hit-and-run strikes and strafing runs on ground forces whilst swatting enemy flyers from the sky. Though certain xenos Attack Craft are faster, few boast the balance of offensive and defensive capabilities that make the Valkyrie so resilient and versatile.

The Valkyrie's primary armament is a Multi-Laser that is mounted just to the side of the cockpit and two Hellstrike Missiles carried under its wings. The Valkyrie is also equipped with two door-mounted Heavy Bolters that are each manned by one gunner. This weapons configuration allows the Valkyrie, when using its VTOL capabilities, to stay on station once its troops have been dropped and provide air support or covering support fire during a difficult insertion. The Valkyrie can replace its Multi-Laser with a Lascannon, and can also replace its Hellstrike Missiles with 2 extra external fuel tanks for extended range operations or 2 Multiple Rocket Pods. The aircraft can also be equipped with ejector seats, Extra Armour Plating for the cockpit, flare or chaff launchers, infra-red targeting systems, and illumination flares.

When a Valkyrie is expected to be assigned to the Guard for a long-duration assignment, usually to provide combat air support and transport, the Aeronautica Imperialis modifies the aircraft by adding more heavily reinforced armour to better protect it in close firefights with enemy forces. The reinforced armour reduces the Valkyrie's maximum altitude and range due to the increased use of Promethium fuel, but it makes the Valkyrie a far more robust combat platform when it is carrying out its VTOL transport and gunship roles. The Valkyrie is capable of carrying 12 Guardsmen, but cannot carry Ogryns. Valkyries also posses the cargo capacity to carry modified Drop Sentinels, Cyclops Demolition Vehicles or Sentry Guns instead of a complement of Guardsmen, but the added weight requires that they also carry two additional external fuel tanks.

There are several variants of the Valkyrie in use by the Imperium, including the following:

Known Users of the Valkyrie

Notable Regimental Users of the Valkyrie

A Valkyrie avoiding enemy searchlights as it approaches its drop-zone

A Valkyrie squadron in-flight to the drop-zone

A Valkyrie under fire from Tau forces during the Taros Campaign

Valkyrie waiting to be refuelled during the Taros Campaign 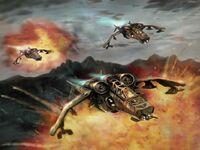 A Valkyrie squadron screaming into battle 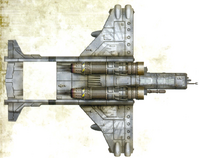 Valkyrie of the 2nd Imperial Navy Tactical Wing, painted to match the terrain of Cadia

Valkyrie of the 71st Imperial Navy Tactical Wing, painted to match the woodlands of Helion V

Valkyrie of the 22nd Elysian Drop Troops Regiment, painted to blend in with the deserts of Yarant III

Valkyrie in the service of Ordo Hereticus Inquisitor Tyrus

Valkyrie in the service of Ordo Malleus Inquisitor Hector Rex

Valkyrie of the 23rd Elysian Regiment, deployed during the Taros Campaign

Valkyrie of the 71st Tactical Fighter Wing; deployed during the Taros Campaign