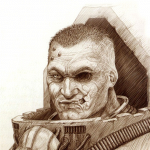 The rays of the sun paint the Heavens with gold, we are preparing to attack, but the sounds of bombs falling on our around us ignite the fury of battle, our commander tells us not to give him our enemy has no

but that takes away all of them, and so with fire in our hearts knowing that the enemy left us more than 3-1 but we know that the Emperor will protect us and so we marched to certain death but they do not know is that by Struck the Hammer of the Emperor.

After hearing the roar of battle, our horizon is visible to Enmig horrific creatures that can perceive the smell of death emanating but we know we shall win, against all odds continue our course towards death and destruction, depronto Captain gives the order to attack, run with all our strength but a deadly rain of bullets brings down a number of our brothers but they can not drop our spirit.

escape so easily, the Orks are falling but we see a creature that is forced monstrosa towards us, leaving a desolate death mark their passing. But our battle cry tod resonates so the death camp shouted, "For the Emperor" and threw ourselves into the terrifying creature. Some threw assalto Brothers over the beast but can only kill controlavan to which the creature but it was the fire of our bolters that felled the creature that was the devastating blow to the moral or the Ork warlord himself Ork could not believe his eyes saw the A handful of men spilling the blood of their awesome Ork. After they lost the Ork kill those who remained in the capital city of the planet Arion Ventris VIII.

Then our Captain Rinzler gave an inspiring speech by the great victory they had: the emperor Rejoice Brothers for giving us the strength and courage to defeat his enemies.

Thank your fallen brothers for having the courage to have died for you and they should be happy knowing that we won. We arrived at the command center of the city and the governor says: "Thanks for saving Brave soldiers of the Xenos threat, but we have nothing to thank them," "No problem" replied our captain and said, "There is nothing to be thankful for, just proteguer are honored this sacred place will serve the Emperor in such a beautiful place. "

Retrieved from "https://warhammer40k.fandom.com/wiki/User:Jdwarboss?oldid=90872"
Community content is available under CC-BY-SA unless otherwise noted.