Eastern edge of the Eye of Terror

Ulthwé, whose full name is actually Ulthanash Shelwé (which means "Song of Ulthanash" in the Aeldari Lexicon), is one of the largest remaining Aeldari Craftworlds that survived the Fall of the Aeldari. It is whispered by those of other Craftworlds that the Aeldari of Ulthwé have been damned by their proximity to the Eye of Terror, exaggerating their psychic potential. Those of Ulthwé know instead that they are a bulwark between the survival of their race and utter destruction.

This Craftworld's world-rune, "The Eye of Isha," symbolises the sorrow of Isha, the fertility goddess from whom the Aeldari believe they descend. Isha, it is said, wept bitterly when Asuryan, the king of the gods, ordered her separation from her mortal children. Vaul forged her tears into glittering Spirit Stones so that her grief might not be in vain. Today, the warriors of Ulthwé bear this symbol as their sigil, a poignant reminder of the godhood they lost long ago.

During the Fall of the Eldar, the lamentable event that heralded the birth of the Dark Prince Slaanesh, Ulthwé was caught in the pull of the Eye of Terror. Here it has remained for millennia, trapped, where the Immaterium intersects with realspace. It is a breeding ground for Chaos and a gateway into the Warp. Due to this baleful proximity to the Eye, Ulthwé must be on constant high alert in case of attacks by the Forces of Chaos. Constant risk and warfare has hardened this Craftworld's citizens to hardship. Due to the lack of Aspect Warriors on the Craftworld, Ulthwé maintains a standing militia known as the Black Guardians, who are highly skilled and better-trained than the Guardians of other Craftworlds.

Craftworld Ulthwé is home to many of the most powerful psykers in the galaxy. The Aeldari of Ulthwé cast themselves as sentinels, keeping an endless vigil over this dread gulf. There, elite cadres of Farseers keep watch for the many and varied guises of Chaos, for Ulthwé’s many talented mystics can foresee future events with a greater precision than those of other Craftworlds. This foresight has allowed them both to preserve their line and thwart their eternal enemies, the forces of the Great Enemy. Ulthwé uses such future-knowledge often to the detriment of other races, always acting to preserve the Aeldari, whatever the cost. Due to the Craftworld's close proximity to the Eye, Ulthwé maintains a larger number of Warlocks, though others believe it because their location causes exaggerated psychic powers in the Ulthwé population that results in the emergence of more Warlocks. Whatever the reason, many Warlocks, Seers and other psychic warriors follow the Ulthwé armies to battle and their psychic skills are even more advanced than those found on other Craftworlds, as they are able to see the skeins of fate further and farther ahead in time and with greater precision.

One of the more famous and integral aspects of the Ulthwé Craftworld is its Seer Council. Formerly led by the now deceased Eldrad Ulthran, the council both overtly and secretly interferes with other races in an attempt to steer fate in their favour. This has no doubt allowed the Ulthwé Craftworld to survive so long in such a perilous position. At the behest of the Council, the Craftworld's warriors are often sent into apparently unrelated battles that will ultimately concern Ulthwé itself. It is largely through these seemingly arbitrary conflicts that have earned the Aeldari their reputation for random and capricious behaviour. The Farseers of Ulthwé know well that stopping the fall of a single stone can sometimes prevent an avalanche, and they manipulate fate itself in order to avert disaster. After all, the Seers of Ulthwé would rather see a hundred thousand humans perish than a single Aeldari life slip away.

Through its interference with other races, Ulthwé is supposedly responsible for several devastating events in the Imperium of Man, including the Second War for Armageddon, the Sanapan Scouring, the Mortis Annihilation and the Third Coming of Orian. Yet they have also made powerful allies within the Imperium, such as the ancient and wealthy House Belisarius of Terra, one of the families of the Navis Nobilite, having saved this house of Navigators' fortune and honour in times long past. The House of Belisarius then forged the Pact of Anwyn with the Aeldari of Ulthwé, agreeing to repay their debt seven times by coming to the aid of Ulthwé whenever it is requested. In the 10,000 Terran years since the Pact was forged, the House of Belisarius has been called to repay five of the seven debts.

Because of Ulthwé's heavy reliance on Seers and Warlocks in its forces, the Craftworld finds itself lacking in Aspect Warriors. The Path of the Seer is long and treacherous, leaving little time for an Aeldari to focus upon the Path of the Warrior. To compensate, it maintains a highly-trained standing army known as the Black Guardians named for the colour of their armour, who are dedicated to rapidly responding to the many attacks from the Eye of Terror. They are feared throughout the region around the Eye of Terror, both as saviours and dreaded foes. To perceive a force of Ulthwé Guardians as weak would be a grave mistake, for their Seers and Warlocks guide them even upon the battlefield. Thanks to this force, Ulthwé has survived millennia of constant attacks by the Forces of Chaos. Though the battle-psykers of Ulthwé are potent, they cannot win battles on their own. It is for this reason that Ulthwé maintains a large standing army of Guardians.

The most powerful of these psykers was the late Eldrad Ulthran, who was the leader of the Craftworld prior to his apparent demise aboard a Blackstone Fortress. The Seers of Ulthwé are said to be much more capable than those of other Craftworlds and can see far into the future to shape the destiny of their Craftworld based on their insights. The Seers may predict catastrophe and steer Ulthwé away from it, or determine the best course of action regardless of the cost to other races. Such foresight can lead the people of Ulthwé to perform actions which seem selfish and erratic in the eyes of Men and other races, but to the Seers of Ulthwé it is clear that such actions must be performed for the good of the Craftworld. Though results may not directly arise from such action, it will indirectly influence Ulthwé's fate perhaps far into the future.

Due to Ulthwé's close proximity to the Eye of Terror, this Craftworld boasts far more psykers than others. Consequently, it has few Aspect Warriors, instead relying heavily upon a standing army of citizen troops known as Black Guardians. These fearless soldiers hold back the advance of the Chaos hordes in a hundred different locations, striking with serpentine swiftness from hidden webway portals across Segmentum Obscurus.

Supporting these troops will be assortments of vehicles and elite units armed and equipped with advanced Aeldari technology. Ulthwé also employs large number of psykers on the battlefield, sometimes in the form of a Seer Council consisting of multiple Farseers and Warlock bodyguards. The Seer Council or Seers will use their potent powers to destroy the minds of their enemies, shape the battle's course to their favour, and perform other tasks to ensure their victory. However, every time a Seer or Warlock delves into the Warp to harness its power to their favour, they risk their own minds. Many have been lost to the terrors of the Warp.

Ulthwé armies may strike fast and hard in the form of an Ulthwé Strike Force, a highly mobile entity of Ulthwé's power in which units are highly mobilised by utilising Jetbikes and other fast vehicles, which enables the force to strike quickly and decisively through Webway gates and vanish as quickly as they appeared. The sight of an Ulthwé force is a brooding, dark image, filled with the air of mourning and suffering. Ulthwé's forces main colour is an ominous black and most Ulthwé vehicles and warrior armour is this colour. This is often contrasted with spotted colours and patterns of bone white, golden yellow and dark red. 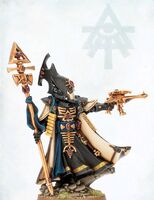 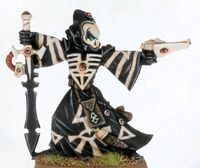 Ulthwé Warlock armed with a Witchblade 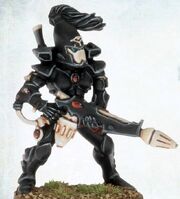 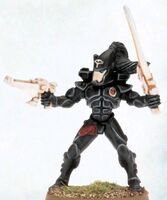 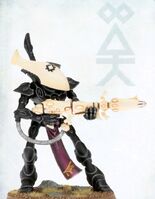 An Ulthwé Farseer summons his formidable psychic powers in battle

A squad of Black Guardians charge into battle

A squad of Ulthwé Storm Guardians 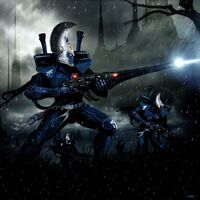 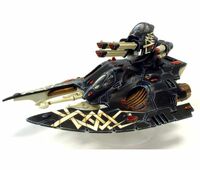 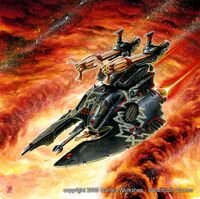 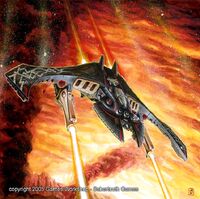 A Phoenix Bomber of Craftworld Ulthwé

An Eldar warhost of the Ulthwé Craftworld assaults a Dark Angels' bastion
Add a photo to this gallery
Retrieved from "https://warhammer40k.fandom.com/wiki/Ulthw%C3%A9?oldid=342311"
Community content is available under CC-BY-SA unless otherwise noted.