Ulrik the Slayer, also known as Grandfather Lupus and the Guardian of the Sons of Russ is the Wolf High Priest of the Space Wolves Space Marine Chapter and is the oldest of all the Space Wolves other than the Chapter's Dreadnoughts. His great mane is white as the slopes of Asaheim on the Space Wolves' Chapter homeworld of Fenris. Ulrik is older even than the mighty Logan Grimnar, the Great Wolf of the Chapter, who has fought in the name of the Emperor for over 700 Terran years.

In his long career Ulrik has fought in countless battles, winning honour for his Chapter again and again. It was during the First War for Armageddon that Ulrik first won renown fighting in the Wolf Guard of Lord Kruger's Great Company. Kruger and his men stormed into invading companies of World Eaters, meeting the bloodthirsty Traitors with equal fury, for the fruit of betrayal is terrible wrath. Kruger himself was cut down and, though Ulrik had lost his own blade in the desperate close-quarter battle, he leapt to defend his dying Wolf Lord, killing three hulking World Eater Khornate Berserkers who had laid Kruger low in the bloody melee. Ulrik fought like a man possessed -- the spirit of the Thunderwolf was strong in him that day, inspiring his Battle-Brothers and even earning the unusual accolade of a grim salute from Angron, the Daemon Primarch of the World Eaters himself. The Imperium eventually emerged victorious. The intervention of an entire brotherhood of Grey Knights ultimately led to Angron's defeat, and denied Ulrik the opportunity to earn a glorious death. His deeds in that terrible battle nonetheless earned Ulrik the accolade "the Slayer", which he has borne from that day forth, and was elected by his fellow Wolf Guard as Kruger's replacement at the head of the Great Company. He declined the honour, which was all but unheard of, instead preferring to fight alongside his fellow Space Wolves rather than lead them. Ulrik chose to become a Wolf Priest instead, and in the long years since his investiture he has earned perhaps his greatest accolades by selecting and training many of the Chapter's greatest warriors.

Before a century had passed, it had become obvious that Ulrik's true genius was in the selection and training of new recruits. He was a veteran of so many wars that his tactical and martial knowledge was invaluable, and his natural charisma made him an excellent mentor. In recent years, however, Ulrik has become ever more aggressive on the battlefield, swearing great oaths to cut down the most deadly of enemies in the name of the Emperor without a care for his own safety. His combination of near-unmatched experience and natural ferocity makes Ulrik a truly deadly warrior, and those who fight alongside him are buoyed up by his natural charisma and excellent mentoring ability.

In 989.M41, after more than 350 years, Ulrik the Slayer avenges the aspirants lost to the Dark Eldar Haemonculi coven, the Hex, after Erik Morkai's Wolf Scouts track the elusive coven to their latest "living art" gallery. Khaeghris Xhakt, the Haemonculus Ancient who masterminded the atrocities so long ago, is betrayed by an ambitious underling, who leaves his ghoulish overseer to face Ulrik alone. Xhakt's head soon adorns a spike in the Trophy Hall of the Fang.

It is Ulrik's sacred duty as a Wolf Priest to recruit and train new Aspirants for the Space Wolves Chapter. In his time, Ulrik has chosen and trained a great many of the Chapter's luminaries and greatest heroes. In fact, Ulrik is the only living Space Wolf who remembers the Great Wolf Logan Grimnar as a young, impetuous Blood Claw, full of fury and future promise. Ulrik witnessed this youth marked by the spirit of Russ rise to glory, and accompanied him during many of his greatest exploits, forging a friendship bound by chains of honor and loyalty stronger than tempered steel. Indeed, Ulrik is the only Space Wolf who still addresses the Great Wolf by his first name.

Ulrik the Slayer is said to be the Space Wolves' oldest Wolf Priest, and mentor to many of their greatest heroes. Ulrik has had a hand in training both Ragnar Blackmane and (allegedly) Logan Grimnar; however the chronology of the Warhammer 40,000 universe actually makes this impossible with regards to Logan, not least because Logan reached the position of Great Wolf (leader of the Space Wolves Chapter) before Ulrik was even promoted to Wolf Priest. This could be explained by the mention of a different Ulric (spelled differently from that of Ulrik the Slayer), though so far Games Workshop has not cleared up the discrepancy. 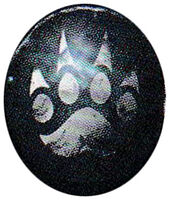 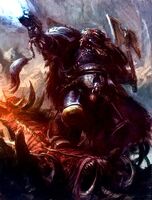 Ulrik the Slayer, wearing the revered relic, the Helm of Russ

A stylised Imperial portrait of Ulrik the Slayer
Add a photo to this gallery
Retrieved from "https://warhammer40k.fandom.com/wiki/Ulrik_the_Slayer?oldid=281446"
Community content is available under CC-BY-SA unless otherwise noted.