Tyrant Siege Terminator squads were an elite formation exclusively utilised by the Iron Warriors Space Marine Legion during the Great Crusade and Horus Heresy eras of the 30th and early 31st Millennia. The vanguard of any Iron Warriors siege breakers formation, these warriors were clad in thick Cataphractii Pattern Terminator Armour and armed with deadly carapace-mounted Cyclone Missile Launchers.

These implacable warriors were fortress-breakers of unparalleled skill. The bleak spectacle of these Astartes wading through storms of lasfire and shell, stoically smashing apart any obstacle before them with Chainfist and krak blast, became synonymous with Primarch Perturabo's wrath unleashed.

Recruited from amongst the most battle-hardened Iron Warriors, Tyrant Siege Terminators were expected to brave the most ferocious enemy fire without regard for their own survival -- even more so than others of their grim brotherhood, they understood the mathematics of war and were ever ready to make a sacrifice in blood to secure victory.

Most often these Veteran warriors were found among the ranks of the Stor-Bezashk, the elite siege masters of the IVth Legion, and deployed to other Grand Battalions as needed to support siege and assault actions. Tyrant Siege Terminators were often at the forefront of the most cataclysmic battles of the Great Crusade.

This formation of Terminators was considered the inspiration for the Fulmentarus Terminator heavy support formation used by the Ultramarines Legion during the Great Crusade and Horus Heresy eras. 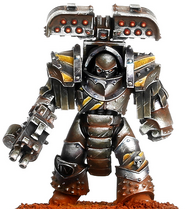 An Iron Warriors Tyrant Siege Terminator in Cataphractii Pattern Terminator Armour armed with a Cyclone Missile Launcher and a Combi-Bolter.

An Iron Warriors Tyrant Siege Terminator in Cataphractii Pattern Terminator Armour and armed with a Cyclone Missile Launcher.
Add a photo to this gallery
Retrieved from "https://warhammer40k.fandom.com/wiki/Tyrant_Siege_Terminator?oldid=333173"
Community content is available under CC-BY-SA unless otherwise noted.