"Every one of the myriad of Tyranid warrior-creatures is a killing machine, perfectly adapted to slaughter its victims. They are the ultimate predators, and we are their prey."


— From the reflections of an unknown Magos Biologis Adept

The Tyranid Warrior (Tyranicus gladius) is one of the most common type of bioforms used by a Tyranid swarm. As Tyranids are constantly biologically adapting their forces to match their enemies' shifting strategies, Tyranid Warriors are often seen in combat in many different sub-species intended for different battlefield and tactical functions.

Tyranid Warriors are among the most important Tyranid bioforms deployed by a hive fleet in battle, as not only are they powerful and deadly creatures in their own right, but they also serve as Tyranid synapse creatures, the important bioforms intended to direct lesser Tyranid bioforms and forming the focal points of the Tyranid Hive Mind's system of telepathic command.

Tyranid Warriors are large creatures, but still smaller than the massive Tyranid Hive Tyrants. They are fast and powerful, with the capability to be strong at ranged combat or in close quarters in a similar fashion to the Hive Tyrant.

According to Imperial research conducted by the Adeptus Mechanicus, the Tyranicus gladius species itself is highly adaptable to any battle role, with over 212 known variants of Tyranid Warriors having been observed -- combining flying, walking, leaping biomorphs, with biomechanical symbiotes that serve as ranged weapons like the Deathspitter or assault symbiotes like scything talons or rending claws or both.

This has caused one Imperial researcher, Magos Biologis Locard, to claim that the Tyranid Warrior is the most adaptable of any Tyranid species yet encountered.

The Tyranid Warrior is often a common trooper found in Tyranid armies. They have the ability to carry a wide variety of deadly biomechanical weaponry and other upgrades, making them suitable to take on many roles in battle. They are easily able to bring valuable long range firepower or high volume, short-ranged support to their Tyranid brethren.

In addition, they can even be seen wielding close combat biomorphs (intentionally evolved Tyranid mutations), such as scythe-like talons or shorter, incredibly sharp claws, which make them fearsome close combat melee combatants.

Less commonly, they are seen in battle bearing great wings, which allow them to swoop onto the battlefield and act as fast-moving assault troops and close-in air support. This variant is called the Winged Warrior by Imperial forces, or the Tyranicus gladius avius sub-species by Mechanicus Magi Biologis.

Tyranid Warriors on the prowl 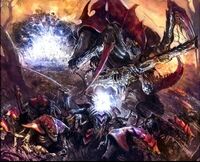 A Tyranid Warrior stalking the battlefield 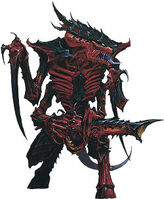 A squad of Tyranid Warriors 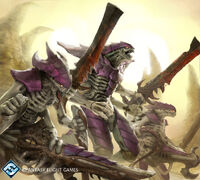 Tyranids Warriors on a rampage
Español
Community content is available under CC-BY-SA unless otherwise noted.
Advertisement