A Troupe Master, also known as the "Leaders of the Dance," and the "Avatars of the Laughing God" and athair in the Aeldari Lexicon, are the officers of the Harlequins, with each troupe led by a Troupe Master. Amidst the mayhem of battle, the masque's elite leader choreographs the carnage. Each Troupe Master directs their Players with the skill of an impresario and the strategic genius of a seasoned general.

It is he that decides where the Troupe goes next, what dances are performed, and what messages they deliver. If the Shadowseers are the heart and soul of a Troupe, the Troupe Master is its mind and cunning.

When performing, a Troupe Master invariably plays the story's hero or major protagonist. In the Dance Without End, the Troupe Master takes the role of the Laughing God himself, striving against She Who Thirsts and thwarting the newly birthed god's unceasing hunger.

Other times a Troupe Master is an emissary for the Troupe, meeting with Craftworld Farseers, Archons of the Drukhari, Eldar Corsair Princes, or representatives of the Aeldari Exodites.

Troupe Masters are choreographers of war, directing their comrades' reactions to the changing fates of battle, and ensuring the Harlequins' performance in the theatre of war is as perfect as it can be. By consent of their peers, the Troupe Masters become focal points for the successes and failures of entire Troupes of Harlequins. In many conflicts, the most talented will even be entrusted with directing the performance of their entire masque.

Troupe Masters are closer to the lead Players of a cast than formal commanders; they are elevated by the will of their brothers and sisters, playing their role until it is time for another to take their place. Troupe Masters act as exemplars for all their Troupe's key characteristics, embodying everything it means to be Light, Dark or Twilight writ large.

Thus Troupe Masters of the Light will hurl themselves into battle like the headstrong heroes of ancient myth, adopting such aggressive, protagonist roles as the Duke of the Hidden Realm, or the Eldanari Prince. Troupe Masters of the Dark, by comparison, are sinister and vindictive, always seeking some way in which to flamboyantly finish off the foe. Troupe Masters of the Twilight, meanwhile, see cycles of transition in everything, often seeming obsessive or insane in their attention to nuance and detail until the precise moment their true genius reveals itself.

In performance, the Troupe Master dances the part of the Laughing God. In combat, a Troupe Master is usually armed with two close combat weapons (one of which is often a Shuriken Pistol), and equipped with a visual disruption Holo-field and Conversion Field emitter. They may also be armed with Vortex Grenades, which they deliver on-target by running forwards alone while the rest of the troupe supplies covering fire. In addition, some Troupe Masters may have psychic abilities.

The Troupe Masters of some Harlequin troupes carry a number of lightweight batons, which unfold into a flag bearing the symbol of their masque. This is commonly left as a "calling card" after the destruction of enemy units and installations.

A Harlequin Troupe Master's battlefield garb is often more extravagant than that of the Troupe's other warriors, clearly marking him out as a leader in the maelstrom of combat. Whereas Players wear elegantly cut jackets or ritually folded tunics clasped about the waist, Troupe Masters often sport high-collared greatcoats which billow and whirl dramatically with each bone-crunching kick or graceful flick of the blade.

Troupe Masters wear grotesque masks that mock the sinister, ugly face of war. Their ever-shifting features flicker between nightmarish horror and leering, sardonic humour at the mortal plight of their foes. 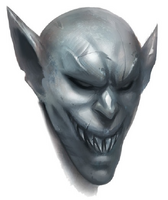 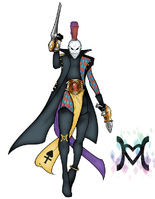 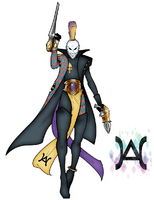 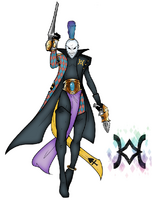 A Masque of the Frozen Stars Troupe Master of the Light 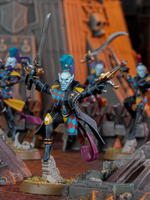 A Masque of the Midnight Shadow Troupe Master of the Light
Add a photo to this gallery
Retrieved from "https://warhammer40k.fandom.com/wiki/Troupe_Master?oldid=342236"
Community content is available under CC-BY-SA unless otherwise noted.