The Triaros, also known as the Triaros Armoured Conveyer, was the primary armoured battlefield transport of the Mechanicum Taghmata during the Great Crusade and Horus Heresy eras of the late 30th and early 31st Millennia.

The Triaros eschews the more commonplace Standard Template Construct (STC) designs and instead relies on a number of unique technologies held as arcana by the Magos Autokrator of the Taghmata and never divulged for wider Imperial use, even by the Legiones Astartes.

The Triaros was designed for use in hostile environments, incorporating multiple galvanic traction drives for increased maneuverability in rough terrain. The Triaros' capacious storage bay can be hermetically sealed if needed, which allows the vehicle to be used in toxic environments and even in hard vacuum and on the surfaces of lifeless worlds. The internal bay is outfitted with numerous specialised couplings for the recharging and cold-sleep of Tech-thralls and light automata.

The vehicle is capable of transporting up to twenty Tech-thralls or light automata. The vehicle's defences are comprised not only of thick brutish armour, but layered techno-cant warding and interlocking energy shields, particularly around its seemingly-exposed control dais, as well as its independently animated weapon Servitors. The Triaros' chassis design and powerful on-board reactor system is very similar to that of the Krios Battle Tank, although it is unknown if the Triaros is a variant of the Krios.

The Triaros is armed with a number of smaller weapon systems for defence against enemy attack while it delivers its cargo to the battlefield. The vehicle's main weapon is a set of pintle-mounted twin-linked Mauler Bolt Cannons, although it is also armed with two Volkite Sentinels, one on each side. These slaved weapons systems are controlled independently by their own servitor-brain. These defensive weapons are found on a number of larger Mechanicum war engines, most commonly on the Triaros Armoured Conveyor.

Each Volkite Sentinel is a pintle-mounted Volkite charger which can be fired in addition to any other weapons the vehicle may be carrying. One of the more remarkable features of the Triaros, however, is the powerful reactor-fed Shock Ram, a massive frontal ram incorporating powerful anabaric projectors and disruption field technology akin to that used in power weapons, which it uses to destroy anything it comes into contact with. The Triaros can also be outfitted with several upgrades or attachments, including Extra Armour Plating, up to two Hunter-Killer Missile Launchers, Smoke Launchers, a Searchlight, Blessed Autosimulacra, or a Flare Shield.

The technical specifications of the Triaros Armoured Conveyer are a guarded secret of the Martian Priesthood and as such, the Adeptus Mechanicus has not made them public. 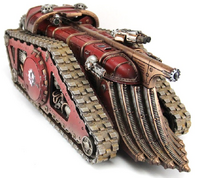 The Triaros Armoured Conveyer as seen from the front

The Triaros Armoured Conveyer as seen from the right side

The Triaros Armoured Conveyer as seen from the rear

A Triaros Armoured Conveyer and a Space Marine Rhino for size comparison
Add a photo to this gallery
Retrieved from "https://warhammer40k.fandom.com/wiki/Triaros?oldid=341031"
Community content is available under CC-BY-SA unless otherwise noted.