"Excellent! The Triarch Stalkers have come. Now there shall be a reckoning with our arrogant inferiors."

While the Triarch Stalker can mount a wide array of anti-infantry and anti-armour weaponry, it is most commonly employed as a dedicated tank-hunter that roams far ahead of the main army. When a Triarch Stalker advances, it does so with a speed and surety that belies its jerking gait. Indeed, it can cover all manner of terrain with a deftness and precision seldom found on the walkers of less advanced races. Able to navigate dense jungle and mountainous terrain as swiftly and sure-footedly as open plains, Triarch Stalkers can easily outmanoeuvre more cumbersome tracked vehicles, the better to unleash their withering firepower against the thinner armour presented by the target's flanks and rear. As such attacks are much more effective when the enemy is taken unawares, Triarch Stalkers rarely indulge in sustained fusillades. Instead, they prefer to employ hit-and-run tactics; launching one or two salvoes of fire and then skittering away onto the shadows before the enemy can react to their threat.

On those occasions when a Triarch Stalker is deployed in the heart of Necron battle lines, its main function is to provide close fire support, and it is typically equipped with a Heat Ray -- a multi-purpose fusion weapon. If an enemy tank stalls the main Necron attack, one focussed blast from the Triarch Stalker's Heat Ray is sufficient to end the threat. Similarly, if dug-in enemy infantry is hampering the Necron advance, a Triarch Stalker can break the deadlock. The pilot simply sets the Heat Ray to dispersed beam, and sends clouds of scorching plasma swirling into every crevasse to boil the enemy alive.

Should the Triarch Stalker's firepower prove insufficient for the task at hand, it can instruct nearby Necron phalanxes to add their firepower to its own, and even transmit targeting data to ensure these augmentative volleys are as accurate as possible. Only the toughest and bravest of foes can withstand such a barrage -- others are driven screaming from the battlefield, or mown down by the pinpoint salvoes.

Such a difference does a Triarch Stalker's presence make that habitual foes of the Necrons have learnt to prioritise its destruction. To guard against this, each Triarch Stalker is protected by layered Quantum Shielding. Though a determined assault can still breach these potent energy fields, it normally buys the Triarch Stalker enough time to withdraw. With their durability thus enhanced. Triarch Stalkers are increasingly deployed at the head of vanguard forces to bear the brunt of the enemy's counterattack until the main body of the Necron army reaches the battle zone. They are as much of a symbol of the Triarch's power as they are deadly warmachines in battle.

Triarch Stalkers are primarily armed with a main weapon located under its main hull. This weapon can be any one of the following:

All Triarch Stalkers are also equipped with the following: 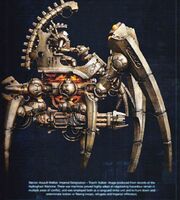 A Triarch Stalker unleashed by the Necrons during the Orphean War 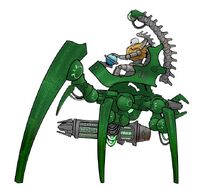 A Triarch Stalker armed with a Particle Shredder
Add a photo to this gallery
Retrieved from "https://warhammer40k.fandom.com/wiki/Triarch_Stalker?oldid=288106"
Community content is available under CC-BY-SA unless otherwise noted.