The Triarch Praetorians are a specialised caste of Necrons who serve as the judges and enforcers of ancient Necrontyr law.

They are tasked with ensuring that every Necron dynasty upholds the terms of the ancient codes of law of the Necrontyr Empire to ensure that they are never forgotten nor ignored.

Unlike other Necrons, Triarch Praetorians are not vassals of a particular Necron Lord or Overlord. As in ancient times, they possess the right to censure nobles who act against the interests or dictates of the Triarch and the Necrontyr codes of honour.

From their initial creation in the eons before the War in Heaven to the end of the 41st Millennium, their task has remained unchanged, and they strive endlessly to see the Necrontyr Dynasties of old restored.

Luckily for the rest of the sentient races of the galaxy, Triarch Praetorians are a rare sight on the battlefield. Often, their only contribution is to determine whether an opponent is an honourable one according to the ancient Necrontyr laws or not, and to remind the commanding Necron Overlord or Necron Lord to act in accordance with them should it be the case.

Only when a Tomb World is rediscovered, or when one comes under attack, will the Triarch Praetorians take the field en masse, to ensure the new asset integrates seamlessly with existing ones, or that it is correctly defended.

In the ancient Necron dynasties, the Praetorians were responsible for maintaining the Triarch's rule and to ensure that wars and politics alike were pursued in accordance with the ancient codes of behaviour of the Necrontyr.

As such, they acted outside the traditional political structures, and held both the right and the means to enforce their will should a Necron Lord, Necron Overlord or even a Phaeron's behaviour contravene the edicts of old.

However, the Triarch Praetorians also held a higher responsibility: to ensure that the Necron dynasties never fell, and that their codes of law and order did not vanish into the darkness. In this, they eventually failed. To all intents and purposes, the War in Heaven saw the destruction of the Necron dynasties.

Though the Triarch Praetorians fought at the forefront of that cataclysm, their efforts were simply not enough. That shame of failure hung heavy on the survivors and drove them to forsake the blissful forgetfulness of hibernation.

As the final sparks of the War in Heaven burnt out, the last Triarch Praetorians withdrew to the Necrontyr's ancient seats of power on the northern galactic rim, preserving what they managed to safeguard of their ancient codes, laws and strictures from the vengeance of the Aeldari.

From their concealed fortresses, the Triarch Praetorians plotted for that day, many Terran millennia distant though it was, when the Necrons would emerge to dominate the galaxy once again, when the laws of old would once more hold sway.

Yet they knew there was a good chance that the untested stasis technology would fail, and that their sleeping kin would never wake. So it was that the Triarch Praetorians came to travel widely throughout the galaxy, masquerading as grim-visaged gods on countless primitive worlds.

They brought the codes of the Necrontyr to credulous primitives, reshaping cultures according to their own ideals. Few civilisations wholly embraced the Triarch Praetorians' teachings; many more were exterminated by wars, natural disaster or the vengeful outriders of Alaitoc Craftworld, who were ever determined to see the Triarch Praetorians fail in their mission.

Nonetheless, the Aeldari ultimately failed at this task as well, and fragments of Triarch lore and archeotech survive on worlds not trod upon by Necrons in many thousands of years.

In the late 41st Millenium, as the Necrons stir ever more into wakefulness, the Triarch Praetorians have sensed an opportunity to expunge their failure. They are travelling across the galaxy, Tomb World to Tomb World, rebinding the sundered pieces of the Necron Dynasties. It will be a long and interminably slow process, for the galaxy is vast beyond imagining, and the locations of many Necron worlds have simply been lost to time.

Yet the Triarch Praetorians have patience enough for this impossible search and a burning determination to see their ancient task fulfilled and civilisation restored. Once a Tomb World has been contacted and bound into the newly-founded dynasties, a host of Triarch Praetorians is assigned to that world in perpetuity, to govern its protocols and act in its defence.

So it is that formations of Triarch Praetorians are often found at a battle's forefront in the defence against invaders and campaigns of reclamation alike. Even could he do so, no noble would refuse such assistance, for extreme age has little dulled a Triarch Praetorian squad's combat skills.

When taking the field, Triarch Praetorians seldom fight in a battle's initial waves, preferring to hover above the fray on Gravity Displacement Packs. From here they watch carefully, not only for the moment at which their intercession will have the most impact, but also to observe the foe's actions.

Though Triarch Praetorians share the usual Necron contempt for any race that is not their own, they are ever watchful for an opponent marked millennia ago by their influence, and sometimes proclaim such creatures honourable foes against whom the codes of battle must be observed. This can prove frustrating to an army's commander -- such niceties are an unwelcome impedance to the battle's prosecution - but it would be a bold Nemesor indeed who overruled the wishes of a Triarch Praetorian in so blatant a fashion.

Fitted with the same high-quality necrodermis bodies as Necron royalty, Praetorians are differentiated by their tails and the rib-like Gravity Displacement Packs mounted to their spines. Triarch Praetorians usually carry Rods of Covenant, symbols of the dominion that the ancient Triarch holds over the Necron dynasties and the galaxy.

Much more than symbols, Rods of Covenant are powerful and versatile weapons whose crackling energies may be expended in devastating short-ranged blasts, or released with staggering force upon striking an enemy in melee.

Triarch Praetorians are sometimes instead armed with Voidblades and Particle Casters. Voidblades inflict horrendous damage in each strike as the weapon phases between different dimensional states, severing molecular bonds and causing a chain reaction of atomic disintegration.

The Praetorian Triarchs serve as heavy shock troops in Necron armies. Wardens of the Necrontyr traditions, they wage war in an exemplary way, embodying the belief that the right warrior in the right place at the right time can turn the tide of battle and deliver victory. When a group of them decides to take the field, they will often remain in reserve, waiting for the perfect moment to strike.

Once the decision to commit has been taken, they will appear seemingly out of nowhere near their intended targets, brandishing their Rods of Covenant, and reducing their victims to dust with fell blasts from their ornate staves of office.

A squad of Triarch Praetorians equipped with Voidblades and Particle Casters. 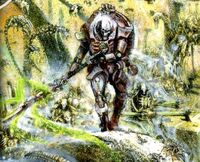 Triarch Praetorian during an assault.

A Triarch Praetorian stands at-the-ready to defend a Necron Lord.

Front profile of a Triarch Praetorian armed with a Rod of Covenant.

Front profile of a Triarch Praetorian bearing a different colour scheme; armed with a Rod of Covenant.
Add a photo to this gallery
Retrieved from "https://warhammer40k.fandom.com/wiki/Triarch_Praetorian?oldid=364594"
Community content is available under CC-BY-SA unless otherwise noted.