"Forget all your preconceptions of war, of battle lines clashing on the churned ground. Your mission is to attack before the foe even realises that the war has begun, to strike hard at those vital weaknesses that all armies possess, but that no commander will admit to. Under my tutelage you will learn how to seek out such fragilities and smite them with every weapon at your disposal. Master these duties and I will have nothing more to teach. You will truly be a Space Marine."

Torias Telion is a Veteran Sergeant in the Ultramarines Space Marine Chapter, assigned to the Chapter's 10th Scout Company. Telion is an incomparable instructor of new Ultramarines recruits.

No less than four currently serving Ultramarines Captains rightly attribute their skills and success within the Chapter's hierarchy to the peerless tutelage of this esteemed warrior when they were Neophytes.

Telion is most famous for his unparalleled skill as a marksman and sniper amongst the ranks of the Astartes.

Telion has served under the command of three successive Chapter Masters and has trod more battlefields across the width and breadth of the galaxy than most senior Captains within the Chapter.

Despite having earned the honour of serving within the Chapter's Honour Guard several times over, as well as the Iron Skull, the Imperial Laurel and a dozen Marksman's Honour badges, Telion has, nevertheless, elected to remain with the Novice Scout Marines of the 10th Company. In this way he is able to lead by example and experience, forging future warriors and matchless leaders for the Ultramarines Chapter.

The Veteran Sergeant has mastered all of the martial disciplines of the Space Marines over his many Terran years of service. Having fought eye-to-eye and blade-to-blade with Mankind's most fearsome enemies, Telion has taken the measure of each and found them wanting.

He is a master of brawl, parry and fluid stance. Few gambits of brute strength or elegant skill can penetrate Telion's guard, and fewer opponents can hope to defend themselves against the Sergeant's precise and controlled blows.

He can take account of environmental interferences, such as wind or gravity, like few others and use a Bolter to deliver a killing shot far beyond the official range.

Two of his many Marksman's Honour badges were earnt for such feats as occurred during the Siege of Pallia, where Telion removed both the T'au Commander and the member of the T'au Ethereal Caste leading an invasion force of T'au with a pair of shots from his Bolter at extreme long range. With the death of their leaders, the invaders lost all resolve and were easy prey for the oncoming Ultramarines.

Though much of this skill is innate, a blend of Telion's own talent with the power of the gene-seed, under his expert guidance even the rawest Novice Scout Marine's marksmanship abilities can reach a level of expertise that is on a par with that of the most experienced Captain.

Indeed, Telion's admonishments and precepts on the subject of war at a distance have become legendary far beyond Ultramar, and the sergeant has been seconded to several Chapters with close ties to Macragge so that his knowledge and unique skills can more widely benefit the Emperor's cause -- following the emergence of the Great Rift, these skills have never been needed more.

The Beast of Calth

It was Telion who answered the call for assistance from the people of Calth when "Old One Eye," a unique Tyranid Carnifex who had assaulted the world alongside other bioforms of Hive Fleet Behemoth during the First Tyrannic War, was released from its frozen slumber in Calth's surface ice and went on to slaughter whole populations across the world.

Telion tracked the beast down, but found it difficult to pierce its heavily armoured hide. As Telion's warriors were cut to pieces by the beast, Telion made an extraordinary shot that struck the creature's ruined eye-socket, the same wound which had end its earlier rampage on Calth centuries before.

Old One Eye was overcome with pain and stumbled into a cavernous ravine. Telion led a search for the body, but the Tyranid once again seemingly eluded its final end.

As of 999.M41, at least one soldier of the Ultramar Auxilia PDF forces present on Calth was named "Telion" in the Scout Sergeant's honour for his deeds on that world.

Telion was seconded to Captain Cato Sicarius and the Ultramarines 2nd Company in 855.M41 during what became known as the Assault on Black Reach. After the initial liberation of Ghospora Hive from the Orks of WAAAGH! Zanzag, Telion was instrumental in tracking down the Warboss' hidden submarine base in an underwater cavern, where Sicarius launched the final victorious assault of the campaign.

In 929.M41, during the Trenor Uprising, a force of three dozen Scout Marines under Telion's command suppressed a rebellion against the Emperor's rule on the world of Trenor in less than a single solar day.

During the Invasion of Ultramar in 854.999.M41 by M'kar the Reborn and the Daemon Prince's Bloodborn, Telion led a force of sixty Scout Marines from the 10th Company to the Agri-world of Quintarn, where the Ultramarines' 5th and 6th Companies under Captains Galenus and Epathus were in battle against the forces of the Dark Mechanicus Adept Votheer Tark.

Although Galenus demanded that Telion and his Scout Marines attach themselves to the main body of the Ultramarines force, Telion refused, and Chaplain Ortan Cassius eventually convinced Galenus to let Telion and his Neophytes for their own way.

Telion took up position in the desert with his Scouts, watching over his fellow Astartes and sniping without warning at the Chaos forces. Telion realised that Tark's great advantage was his ability to manufacture war machines at an alarming rate, and thus replace his combat casualties rapidly and with impunity.

To gain the strategic upper hand, Telion led his Scout Marines on a series of missions to infiltrate and destroy Adept Tark's Dark Mechanicum manufactoria.

This included the largest and most important forge located atop the Maidens of Nestor, Quintarn's largest mountain, named after the thousand priestesses of the Imperial Cult who committed suicide there during the War of the Beast in the 32nd Millennium rather than be taken prisoner by the Greenskins.

With the loss of his manufacturing capacities, Tark's forces were swiftly routed and destroyed by the superior tactics and martial capabilities of the Ultramarines.

During the Plague Wars that stained Ultramar, Telion was forced to lead his entire Scout Company to hold off a Death Guard attack upon the Ultramarines Chapter's training academy. To the selfless Telion it was just another action borne of duty, but the tale of his victory has become well known to every Battle-Brother of the Ultramarines.

Telion makes use of all the wargear appropriate for a Veteran Scout Marine Sergeant, including Scout Armour, a Camo Cloak to enhance his stealth abilities when sniping, a Bolt Pistol, and Frag and Krak Grenades.

However, his preferred weapon is a Stalker Pattern Bolter called Quietus that has been loaded with Stalker Silenced Shells so that he can make use of his extraordinary marksmanship skills at any time. 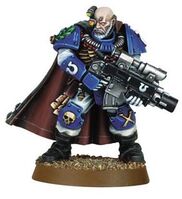 Veteran Scout Sergeant Telion garbed in his usual wargear, including the Stalker Pattern Bolter Quietus
Add a photo to this gallery
Retrieved from "https://warhammer40k.fandom.com/wiki/Torias_Telion?oldid=352686"
Community content is available under CC-BY-SA unless otherwise noted.