A Tomb Blade is an anti-gravitic Necron combination void fighter and Jetbike which uses dimensional repulsor units to operate in both the void and the atmosphere of a world. It can unleash powerful firepower upon enemy voidships, vehicles and ground forces as they corkscrew wildly through the ether. Often deployed as part of a vanguard force, the Tomb Blade's deadly speed and unpredictable nature make it a dangerous foe.

The Tomb Blade was originally designed as a void fighter by the Necrons during the final days of the War in Heaven. As a Necron's robotic body is immune to the hazards of interplanetary space, traditional pressure-sealed and canopied voidcraft were unnecessary from the very outset of the Necron's rule over the galaxy. Acting in swarms that were dozens or even hundreds strong, Tomb Blades would swarm over enemy capital ships, overwhelming armour and weapon systems with pinpoint waves of Gauss and Tesla fire. So successfully did the voidcraft perform in its primary environment that modified versions soon appeared in planetside battles -- one of the few occasions in which the hidebound traditions of the Necron military were adapted to better exploit emergent opportunity.

The Tomb Blade has a curious motion for an aircraft of its design, eschewing the arrow-straight attack vectors of other Jetbikes and fighter craft. The Tomb Blade's reactionless dimensional repulsor engines ensure that gravity, momentum and the other physical forces of normal space-time have little purchase upon its frame, allowing it to be propelled in a way that has no care for the confines of momentum or inertia. As a result, the craft often corkscrews across the battlefield rather than taking a more direct approach, and constantly changes vector and altitude in a manner fit to boggle the enemy's aim. No flesh and blood pilot could ever hope to contend with such an anarchic approach without succumbing to blackouts and nausea, but such hazards have no hold over undying machines.

Despite appearances to the contrary, the attack patterns performed by Tomb Blades are strictly controlled by a series of hyper-fractal equations. Indeed, they have to be, for the hardwired Necron Warrior alone would make for a truly dreadful pilot. To compensate for this, attack patterns are entirely pre-programmed and the pilot cannot alter them once in flight, though it can switch between different tactical packages in order to adapt to fresh objectives. The pre-programmed nature of a Tomb Blade's flight means that it is therefore theoretically possible to predict the flightpath it will take, but only a genius-level intellect could divine that there was a pattern at all. Even if said genius could isolate and identify the particular set of equations in use, no conventional targeting computer could ever hope to process the data fast enough to be of any use. Thus, a Tomb Blade is just as difficult a quarry as the most accomplished of all mortal-piloted aircraft, even though its pilot's actual skill is immensely inferior to the best pilots of the other starfaring races.

Tomb Blades often operate far ahead of the main Necron army, striking at lightly-defended positions, supply convoys and other targets of opportunity. Though the planetside variants of the aircraft do not mount the heavier starship-busting weaponry of the voidfighter variants, the twin-linked Tesla Carbines and Gauss Blasters can prove just as devastating when employed against advancing infantry. Such is the Tomb Blade's unpredictable advance that the piercing whine of its dimensional repulsors is often the only clue to its approach. At that point, astute enemies dive for any cover they find. The others disintegrate as the air around them explodes in a blaze of unstable and potent viridian energy.

All Necron Tomb Blades are also programmed with reanimation protocols, which allow them to repair themselves even when critically damaged. Necrodermis, the living metal that makes up Tomb Blades and all other Necron units and vehicles, enables this capacity due to its remarkable inherent regenerative properties. A Tomb Blade can be armed with any one of the following as their primary weapon:

A Tomb Blade may be also be equipped with any of the following: 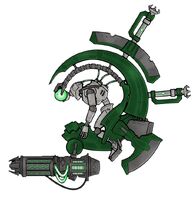 Side view of a Necron Tomb Blade
Español
Community content is available under CC-BY-SA unless otherwise noted.
Advertisement